Flash Back : India’s great victory in Perth during the controversial 2007/08 Tour

A story on India's most memorable Test victory under Anil Kumble at the WACA in Perth during the 2007/08 Tour.

The third Test Match of the much-hyped ‘Agneepath’ Series of the Border-Gavaskar Trophy at Perth is on the 13th of this month with India entering the WACA after two huge defeats at Melbourne and Sydney. Four years ago, it was a similar scenario for Team India as they lost the first Two Tests at the same venues before the 3rd Test at Perth on the 16th of January 2008.

The Lead Up to the Third Test at Perth

The cricketing atmosphere was very hot and tense leading to the then 2008 Perth Test as the relations between the Indian and the Australian teams was at an all-time low following the Monkey-gate. It became a huge issue as Andrew Symonds and a few of the Australian players had accused Harbhajan Singh of racial abuse. The ICC Match Referee of that series - Mike Procter raised the temperatures by banning Harbhajan for three Tests after finding him guilty. There were threats about India abandoning the tour mid-way following all that controversy but fortunately all that didn’t happen with the top officials of ICC and BCCI settling things in the background atleast temporarily. 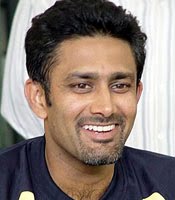 The 2008 Test Series was also marred with poor Umpiring decisions that went against India. Especially in the Sydney Test when Andrew Symonds despite getting a noisy edge to the keeper was given not out by Steve Bucknor. There were lots of suggestions that the Umpires especially Steve Bucknor was intentionally giving bad decisions against the Indians!

On the other hand, The Australian players were accused of being unsportive and playing against the spirit of the game by none other than the then Indian Skipper Anil Kumble. The BCCI back home flexed its muscles to ensure that Steve Bucknor was kicked out of the Umpire’s list for the Perth Test literally! After 10 days of high drama, cricket returned to where it belongs as the Third Test at the WACA Ground in Perth began as scheduled.

Both the teams made two changes to their respective line-ups. India replaced Yuvraj Singh and Harbhajan Singh with Virender Sehwag and Irfan Pathan. The Aussies had a big blow losing big Matt Hayden to a hamstring injury. Anil Kumble won the toss and India took the brave decision of batting first on a pacy and bouncy WACA pitch.The first day saw India putting up a competitive 297 for 6 which was based on a 139-run stand for the third wicket between Rahul Dravid (93) and Sachin Tendulkar (71).

Day 2 : Swing is King as Australia collapse to RP Singh

On the second day, India stretched its total to 330. Mitchell Johnson did most of the damage for the hosts taking four wickets while Brett Lee got two wickets.

A superb bowling performance from India saw them grab a handsome 118-run first innings lead after the Aussies had collapsed to 212 with their innings lasting only 50 overs. Swing was the King on Day 2 as RP Singh took four wickets to lead the Indian attack. He was well complemented by the other three specialist bowlers - Irfan Pathan, Ishant Sharma and Anil Kumble who took two wickets each.

The second day’s play saw a historic moment with Anil Kumble claiming his 600th Test wicket when he got rid of Andrew Symonds. The Aussies would have folded to a much lower score as they were at one stage reeling under huge pressure at 61 for 5! Half centuries from Andrew Symonds (66) and Wicket Keeper Adam Gilchrist (55) threatened India to some extent but was cut short to 102 runs.

India finished Day 2 extending its lead to 170 runs with nine wickets in hand.

The next day, the Aussies fought back by reducing India to 125 for 5 with the lead at 233 runs. The visitors failed to delivery the knockout punch to the Indians as VVS Laxman (79) and Wicket Keeper MS Dhoni (38) bailed them out with a crucial stand of 75 runs. Even no.10 RP Singh chipped in with a precious 30 as India finished with a total of 294 in their second innings to leave Australia with a stiff target of 413. Brett Lee picked up three wickets again and tall seamer Stuart Clarke collected four scalps.
By the close of Day 3, India were sitting pretty taking two early wickets in the Australian second innings thanks to left-arm swing bowler Irfan Pathan.

It took a sensational delivery from the then 19-year-old Ishant Sharma to provide India with the breakthrough on the third day to end what was a promising 74-run stand between Skipper Ricky Ponting and Michael Hussey. Ishant who got an extra over in his spell on the insistence of his statemate Virender Sehwag answered to the call by forcing Ponting to jab at an away going bouncy seamer to second slip.

India made good inroads to have Australia at 243 for 7 by Tea and after the break a well set Michael Clarke (81) threw his wicket by leaving the crease too early for Kumble to have him stumped out. A few heroics from Mitchell Johnson (50*) with support from Stuart Clark (32) put up a stubborn partnership of 73 runs for the 9th wicket to only delay what was an inevitable historic win for India. Australia got bowled out for 340 leaving India to a 72-run win. It was a collective effort from each of the bowlers including Virender Sehwag chipping in with two wickets which also included the big one of the dangerous Adam Gilchrist.

Irfan Pathan was named as the Man of the Match for his all-round contributions - 28 & 46 with the bat and 2/63 & 3/54 with his swing bowling. Its quite a similar situation that India is into four years after this historic maiden Test victory at Perth. However, we will have to see if this team of 2012 under Skipper MS Dhoni has the same amount of hunger to prove themselves and pull off the victory against all odds...

A feature by BV Swagath