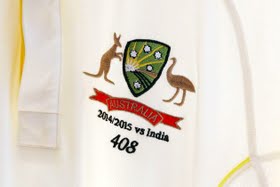 Clarke has a remarkable record at Adelaide Oval, where in nine Tests he has scored 1279 runs at 98.38, including six centuries.

Australia begin the series ranked second and India sixth in Tests; India could drop to seventh if they lose 3-0 or 4-0

Adelaide Oval now uses drop-in pitches but the curator Damian Hough said on match eve that he expected "a typical Adelaide Oval pitch" for the Test. "Hopefully there is a little bit in it early, it's going to be good to bat on, and then take a little bit of spin and some inconsistency later in the game," Hough said.