Batting the major worry for England

Going into the current ODI series against India, England had won only one of the previous 16 encounters held in India over the last three visits. However, all that seemed destined to change after the Englishmen, as if they were just carrying on from where they left off in the Tests, won the opening one-dayer courtesy a superlative batting performance.

Going into the current ODI series against India, England had won only one of the previous 16 encounters held in India over the last three visits. However, all that seemed destined to change after the Englishmen, as if they were just carrying on from where they left off in the Tests, won the opening one-dayer courtesy a superlative batting performance. Three matches into the series though they now find themselves in familiar territory, struggling to cope up with the conditions and strength of the opposition at home. Their batsmen in particular have been responsible for putting England on the back foot again.

The England batting was excellent in the first ODI at Rajkot, with Alastair Cook and Ian Bell coming up with superlative knocks, which were very well supported by the lower order batsmen. Samit Patel’s blast in the slog overs, in particular, was sensational, and the end of the day turned that tide England’s way in spite of some good performances from India with the bat. India did do the English batsmen a big favour by continuously bowling length deliveries at the slog overs and, to their credit, the Englishmen took full advantage of the same. 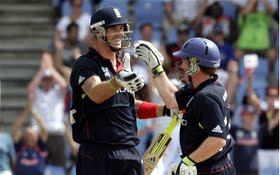 The loss at Rajkot taught the Indians some stern lessons, and since, they have improved their game tremendously, especially with the ball. England, on the other hand, haven’t been able to stand up to the Indian challenge more so with the bat in hand, as a result of which they now find themselves with a very difficult chance of winning the series. Some of the England batsmen have got starts, but have failed to capitalise on the same. In that sense, they have been unsuccessful in maintaining pressure on the Indian bowlers, who’ve got better and better as the series has progressed.

No one from the top or middle order has made a half-century for England in the last two losses at Kochi and Ranchi, which says at story in itself. In the second game, England were chasing a big score and only threatened briefly when Kevin Pietersen and Joe Root pieced together a partnership. Neither went on to register a big score, and India eventually went on to win the clash without much trouble. On Saturday, the England batting fell flat, this time taking first strike. The visitors were put under pressure from the very start and could never break the shackles despite some of the batsmen occupying the crease for decent durations.

It goes without saying that for England to make a comeback into the series from this point their batsmen will need to fire. Even among them the contribution of two men would be significantly crucial -- Pietersen and Eoin Morgan. Both are attacking batsmen, and their aggression is something that can test the raw Indian bowling. KP will be expected to deliver considering his experience, but whether Morgan can come up with the goods remains to be seen. England’s fortunes might well be decided by how they bat in the remaining two games.