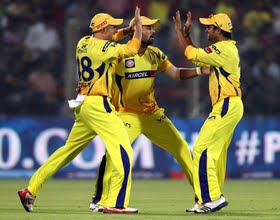 Mahela Jayawardene: Couple of days now, keep it simple, let players think of what went wrong. No shouting or anger from me, I am diplomatic, I will keep it that way. Hard to explain, everyone has to lift their game and create situations from where we can win matches. We have had enough chats and the boys are professional enough to realise what's expected out of them.

MS Dhoni: 170 was not on the cards, wasn't that kind of a wicket, Hussey got off to a start and it was important to capitalise. Look at the number of overs to decide who bats where, we also look at the bowlers and their overs remaining. You got to used to the pace of the wicket, did not think it was a fast wicket, at Chennai it's difficult to hit it so important to give yourself a few deliveries. We have lost a few games but it's good to get the perfect combination by the end. Quite a few came in the yellow tees and got a lot of support and fans help you when you are not going through a great time.

Michael Hussey man of the match: I think opening's a very good place to bat, enjoying batting here. I don't think we have a clear defined role for me, it's about assessing the pitch quickly and along with the others, try and get going. Good to receive the sixes award too.

Raina is set to become the only player to play 100 consecutive games for a team in T20s.

For Delhi Daredevils, desperate times are fast approaching. Each team will play 16 matches in IPL 2013's group stage. Daredevils have played five of those games without scoring a point; they've almost arrived at a stage where each game is a must-win for them to progress to the playoffs.

Suresh Raina is one short of 100 games for Chennai Super Kings (IPL and Champions League combined).