It was a dramatic fourth day’s play at the Kensington Oval in Bridgetown, Barbados as Australia have West Indies in a spot of bother. The hosts have been reduced to a disastrous 71 for 5 in their second innings after a sporting declaration from Micael Clarke. West Indies now go into the final day nervously as their overall lead is just 114 runs with the top five batsmen all back in the pavilion!

Australia resuming Day 4 at 248 for 5 needed to close in towards West Indies’ first innings total of 449. However, they had a shocking start which had them on the mat at 285 for 8 with the overnight batsmen Michael Hussey and Matthew Wade not able to do enough damage to the hosts. 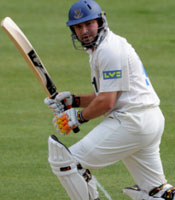 Just when West Indies looked good to wrap up things for a significant lead, came a couple of frustrating partnership of 44 and 77* for the 9th and 10th wickets respectively. The centre of these two partnerships was no.9 Ryan Harris who scored an unbeaten 68 from 123 balls with 7 fours. No.10 Ben Hilfenhaus contributed 24 while last man Nathan Lyon remained unbeaten on 40 (from 89 balls with 6 fours). Skipper Michael Clarke made a sporting declaration at 406 for 9 which left the hosts with a lead of 43 runs.

The declaration from Clarke paid dividends immediately as West Indies were shocked to 4 for 3 by Tea! By stumps, West Indies crawled to 71 for 5 in 38 overs with Narsingh Deonarine (20*) and Carlton Baugh (2*) staying unbeaten. The destruction to the West Indian second innings came from Ben Hilfenhaus who claimed superb figures of 10-4-17-3. Ryan Harris and Peter Siddle chipped in with a wicket each.