A lethargic Kolkata Knight Riders will face a much more confident Chennai Super Kings in match number 21 of IPL 2020 at Abu Dhabi on Wednesday. KKR have had a mixed run in the tournament so far with two wins and as many losses. CSK, on the other hand, have lost three out of five matches but go in having thrashed Kings XI Punjab by 10 wickets in the previous game.

KKR skipper Dinesh Karthik will go into the match under massive pressure. He has not performed either as a captain or as a player. Some of the decisions he has made as leader have been baffling. The move to continue with Sunil Narine as opener despite his constant failures has been baffling. Karthik’s own batting has left a lot to be desired. He only has 37 runs from four matches, and yet has been batting ahead of the superior Eoin Morgan and Andre Russell.

In the previous match, Rahul Tripathi, a proper batsman, batted at number eight and smashed 36 from only 16 balls. However, it was a futile exercise, as the match was way beyond KKR’s reach by the time he came. Also, it is about time KKR gave a chance to English T20 sensation Tom Banton at the top of the order. Kolkata also need to use their bowling reserves better while lead pacer Pat Cummins must display better consistency. 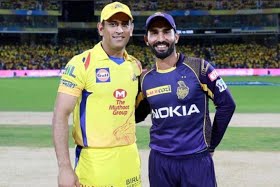 For Chennai, Shane Watson finally repaid the faith of his captain with a stupendous batting effort. His unbeaten 83 from 53 saw him return to his blistering best. Faf du Plessis carried on his great run of form with an unbeaten 87 from 53 as Chennai completely bulldozed KXIP. They would want the other batsmen to also come to the party in the games to come.

In the bowling Deepak Chahar has been economical while the inclusion of Shardul Thakur has added teeth to the bowling attack. More will be expected out of the likes of Sam Curran, Dwayne Bravo and Ravindra Jadeja.

Head-to-Head Record: CSK have a 14-8 win-loss record over KKR from 23 games. One match has produced no result.

The surface at Abu Dhabi is a decent one for batting, but there has been purchase for the spinners.

The temperature will be around 31-33 degree Celsius. Humidity will be 51 per cent.