MS Dhoni in another case of conflict of interest

Dhoni had signed a 210 crore deal with Rhiti Sports and is said to earn 15% of the profits made by Rhiti Sports. Being the Captain of the Indian team in particular, Dhoni finds himself in a major conflict of issue case. 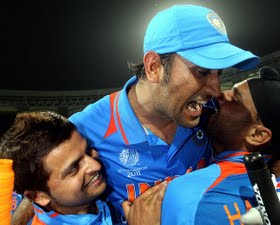 Cricket lovers have been finding it hard to understand Dhoni’s silence on the spot-fixing scandal that has hit the IPL and the Chennai Super Kings. The fresh revelation that Dhoni has a role in the sports management company means that he could have given preferential treatment to Raina, Jadeja and others in selection matters. Dhoni has another conflict of interest case to deal with being the Vice-President of the India Cements which owns the Chennai Super Kings.

Meanwhile RP Singh has come out and denied any links with Rhiti Sports although his name continues to be displayed in the company’s website. An unanswered question of IPL 6 is about RP Singh getting away from any suspicion when he bowled a big noball to Ravindra Jadeja in the climax of a tight match between the Royal Challengers Bangalore and the Chennai Super Kings.

Apart from Dhoni’s case, the Indian Media has also started to show Anil Kumble’s business in sports management although it is nothing new. Kumble is also the President of the Karnataka State Cricket Association and also happens to be the Mentor of the Mumbai Indians.