Sri Lanka kept their hopes alive of making it to the Semi Finals of the ICC Champions Trophy 2013 by beating hosts England in a high-scoring Group A Match at The Oval in London. Kumar Sangakkara with a 15th ODI century steered the Lankans to a 7-wicket win with 17 balls in a run chase of 294.

Sri Lanka kept their hopes alive of making it to the Semi Finals of the ICC Champions Trophy 2013 by beating hosts England in a high-scoring Group A Match at The Oval in London. Kumar Sangakkara with a 15th ODI century steered the Lankans to a 7-wicket win with 17 balls in a run chase of 294.

Asked to bat first, England got off to a solid start of 48 for 1 in 11.3 overs. Eranga claimed the first wicket for SL with Ian Bell flicking him into the hands of squareleg. Skipper Alastair Cook took England to 131 for 2 in the 29th over before missing a sweep to Herath which had him lbw. Cook scored 59 from 85 balls.

The real foundation and momentum for England came from the pair of Jonathan Trott and Joe Root with the 3rd wicket pair adding 87 runs in 12.3 overs. Trott was dismissed after scoring 76 from 87 balls when he missed a sweep off a near yorker from Herath to be lbw. Sri Lanka triggered a mini collapse of the English middle order with the hosts losing four wickets for just five runs in 14 balls. It all started with the impressive Joe Root (68 from 55 balls with 5 fours) slogging a slower one from Malinga to deep mid wicket.

Eoin Morgan was wrongly given out lbw to a reversing full length inswinger from Malinga outside off. Another slog overs specialist Joe Buttler got out cheaply as well when he edged a big drive off Kulasekara to the keeper. Kulasekara yorked Brensnan to leave England at 254 for 7 in the 48th over. Despite the collapse, England got perfect finish with Ravi Bopara (33* from 13 balls with 2 fours and 3 sixes) smashing Shaminda Eranga for 28 runs in the final over. 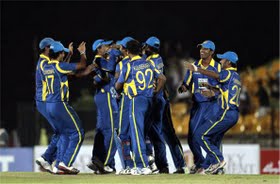 England struck early with the new ball with Kusal Perera miscuing a lofted shot off Anderson to mid on in the 3rd over. Sri Lanka bounced back after that blow to come up with two back to back partnerships – 92 runs for the 2nd wicket and 85 runs for the 3rd wicket to threaten the English target of 294. Dilshan scored 44 from 56 balls before his big hit off Swann was caught at long on. Sangakkara who was batting aggressively got a breezy partnership with Mahela Jayawardene who got out after scoring 42 from 43 balls. Jayawardene got out with SL at 187 for 3 in the 36th over when his pull off Anderson flew into the hands of deep squareleg.

Sri Lanka’s tactical move of sending in Nuwan Kulasekara as the pinch hitter looked bad for starters but the short swing bowler packed quite some punch in his big shots. Kulasekara was unstoppable after he had clobbered Swann for a couple of sixes. Kulasekara finished the match in a hurry with an unbeaten blinder of 58* in 38 balls with 5 fours and 3 sixes. Sangakkara stayed right till the end with 134* from 135 balls with 12 fours.

Both England and Sri Lanka will have to win their respective last games to make it to the Semis.

Toss and Teams: Sri Lanka have won the toss and asked England to bat first under chilly cloudy conditions at The Oval in London. Graeme Swann comes in for James Tredwell in the England XI. For Sri Lanka, Nuwan Kulasekara replaces Thisara Perera. Sri Lanka will have to win this match to stay alive in the tournament.