New Zealand scrape through to a nervous 1-wicket win

New Zealand scraped through a nerve-wrecking one-wicket win over Sri Lanka at Cardiff in a low scoring contest. Just a couple of days, two teams at this very ground had scored nearly 600 runs and today Sri Lanka and New Zealand barely got past three figures with great difficulty.

New Zealand scraped through a nerve-wrecking one-wicket win over Sri Lanka at Cardiff in a low scoring contest. Just a couple of days, two teams at this very ground had scored nearly 600 runs and today Sri Lanka and New Zealand barely got past three figures with great difficulty. Yet there was enough intensity and action in the match to keep the viewers on the edge of their seats. Whenever Lasith Malinga was running in to bowl, a wicket could have easily gone down and Sri Lanka despite defending a small total of 138 made the Kiwis toil hard till the last run was scored.

The match began with Sri Lanka losing a wicket off the very first ball with Brendon McCullum flying parallel to the ground at second slip to hold onto an edge from Kusal Perera off Kyle Mills. Mitchell McClenaghan provided the next blow when his length ball bowled Dilshan through the gate in the 6th over. A surprise move to introduce Daniel Vettori quickly in the 8th over itself gave results as the experienced left-armer foxed Mahela Jayawardene with an arm ball to have him lbw. In the next over, Dinesh Chandimal got out for a duck edging a full length sucker ball from Mills to the keeper to leave Sri Lanka at 34 for 4.

New Zealand sustained enough pressure on the Lankans to put them on the mat. Skipper Angelo Mathews couldn’t do the rescue act as he got bowled round his legs by McClenaghan after shuffling far too across in a flick in the 21st over. The next wicket for the Kiwis came through with Sangakkara sending back Lahiru Thirimanne from a single and getting the latter run out. New Zealand got two more key wickets after this – Thisara Perera holing out to long on off McClenaghan and the big fish Kumar Sangakkara (68 from 87 balls with 8 fours, slicing a big shot off Nathan McCullum to backward point).

Sri Lanka folded to 138 all out in 37.5 overs with McClenaghan taking 4 for 43 while Mills and Nathan McCullum chipped in with a couple of wickets each. New Zealand batted out 6 overs before lunch to get to 26 for the loss of Luke Ronchi, who was caught behind off Shaminda Eranga. The post lunch session was simply dramatic as Sri Lankan bounced back in style.

Malinga started the collapse in the 9th over with Kane Williamson not picking his full toss and was ducking under but the ball dipped to hit his thigh infron of the stumps for an lbw. Six balls later, Rangana Herath had Ross Taylor lbw to an arm ball and in the very next ball, the in-form Martin Guptill edging a forcing backfoot drive to a rising delivery from Eranga to an agile Mahela at slip. It was game on at Cardiff as NZ slipped to 49 for 4. 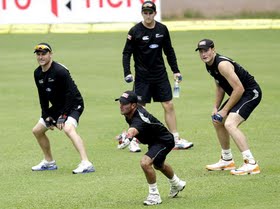 James Franklin along with Skipper Brendon McCullum looked to restore normalcy before he got out in the 15th over lbw to Dilshan after playing well outside the line to a drifter. About five overs later, Lasith Malinga sent in a toe crushed to have Vettori lbw though the Umpire missed an inside edge to leave the Kiwis at 80 for 6. New Zealand facing defeat at this stage had a wonderful partnership coming from the McCullum brothers. The Kiwis got to 115 on the board before Brendon McCullum (18 from 49 balls) succumbed to a slower yorker from Malinga to which he was two minutes too early.

The match tilted in SL’s favour completely when the dangerous Nathan McCullum (32 from 42 balls) got out lbw to a yorker from Malinga around leg. The Kiwis scored a dozen more runs before they lost their 9th wicket with Thisara Perera pulling off a fluke run out of Kyle Mills after the former’s attempted direct hit at the bowling end missed by some distance but hit the batting end stumps!

New Zealand needed five runs to win with one wicket in hand! Tim Southee (13* from 21 balls) who was lucky to escape an lbw sometime back off Malinga saw the slinger’s last over and finished the victory along with no.11 McClenaghan. Lasith Malinga’s 4 for 34 went in vain for the Lankans. The Man of the Match award went to Nathan McCullum for his all-round show.

Toss and Teams: Sri Lanka have won the toss and elected to bat first at the Sophia Gardens in Cardiff. The pitch is expected to be good for batting with scores of around 300 being par.