Australia’s head coach Justin Langer has stated that Australia is on the constant lookout for a match-changing finisher in the ODI format. In the absence of the same, they are struggling for

Australia’s head coach Justin Langer has stated that Australia is on the constant lookout for a match-changing finisher in the ODI format. In the absence of the same, they are struggling for consistency. In South Africa, Mitchell Marsh was sent in at No.6 in the second and third ODIs and delivered average returns with scores of 32 and 36.

Previously, Glenn Maxwell and Marcus Stoinis have occupied the number six slot, but without too much success. Of the recent experiments, wicket-keeper Alex Carey has been the most successful in the finisher’s role. He batted at No.7 for most of 2019 and registered impressive scores of 71 and 85 in the 2019 World Cup.

According to Langer, Australia, like most teams, need a finisher who can perform a role similar to what Jos Buttler does for England. "We've been fortunate in the past with a Mike Hussey or a Michael Bevan who are masters at it. Dhoni is a master of it. Jos Buttler has been brilliant at it for England,” Langer was quoted as saying in an ICC report as Australia departed from South Africa following a rare 0-3 whitewash. 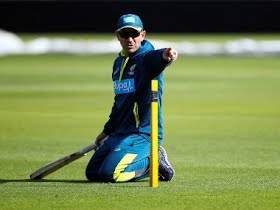 "What I've learned is everyone in the world is looking for it," Langer added on the importance of a prominent finisher. Australia’s next assignment is the three-match ODI series against New Zealand, beginning on March 13. It will provide the think-tank another opportunity to build a strong middle-order and zero in on a finisher.

While Australia was handed a 0-3 defeat by the Proteas, New Zealand will be confident having whitewashed India in the ODIs and Tests. The Aussies though will start as favorites as they have often got the better of their Trans-Tasman rivals, especially at home. Not too long ago, Australia had trampled the Kiwis in a completely one-sided Test series. It remains to be seen how much South Africa thrashing affects Australia though. Apart from Marnus Labuschagne, no one scored a hundred in the ODIs. Among the bowlers too, Pat Cummins’ four wickets as Australia’s best in comparison to South Africa’s Lungi Ngidi picking up nine.