End of the road for MS Dhoni? No BCCI contract for former India captain

Former India skipper MS Dhoni has not been given a BCCI central contact for 2019-20. Dhoni has not turned out for India since the team’s exit in the semi-final of the 2019 World Cup.

Former India skipper MS Dhoni has not been given a BCCI central contact for 2019-20. Dhoni has not turned out for India since the team’s exit in the semi-final of the 2019 World Cup. Dhoni was in Grade A in BCCI's central contracts list last year. He now finds no place in the 27-member list released for the period October 2019 to September 2020.

While Dhoni had retired from Test cricket in December 2014, his future in ODIs and T20Is has been a matter of debate ever since India’s World Cup exit. Apart from Dhoni, Dinesh Karthik, Khaleel Ahmed and Ambati Rayudu have lost out on their contracts.

Meanwhile, while Mayank Agarwal has been given a Grade B contract, Navdeep Saini, Shreyas Iyer, Washington Sundar, and Deepak Chahar have got Grade C contracts.

During Dhoni’s break from the game, Rishabh Pant has taken the gloves for India in T20Is and ODIs. However, he is yet to cement his place in the side. As a result, it is being speculated that Dhoni might make a back-door entry into the World T20 squad, depending on his performance in IPL 2020. 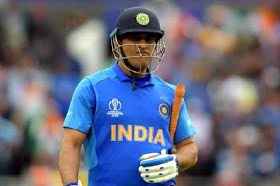 After the decision to leave out Dhoni from the BCCI annual contracts list, former India off-spinner Harbhajan Singh told India Today that, according to him, Dhoni has played his last game for India.

"It is probably the end of the road for MS Dhoni. I heard the World Cup would be his last event for India - after that he won't play for India again. He had made up his mind long back and that is why he has not made himself available," Harbhajan Singh told India Today.

"If Dhoni has a good IPL and is sure he will because he works so hard, I have no doubt he will have a great IPL. As far as I know, he has made up his mind. If he has a good IPL, he will still make himself unavailable. I don't see him making a comeback. Knowing him, he has played his last game for India during the World Cup," Singh added.

Former India skipper Sunil Gavaskar has also been critical of Dhoni’s decision to keep him away from the Indian team. As captain, Dhoni has led India to victory in the 2007 World T20, 2011 World Cup and the 2013 Champions Trophy, the only international captain to win all three ICC trophies.