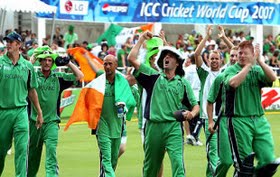 The pitch for this game is on the opposite side of the square to that was used for the match between Bangladesh and England, so the square boundaries will not be quite so short. While the pitch is, by Australian standards, lacking just a bit of pace, it is true and offers the bowlers little. William Porterfield reasoned that 290 might be a par score, though no team has made more than 300 in an ODI here in the last decade. While there is an outside chance of a shower on the morning of the game, the weather is expected to be partly cloudy but generally sunny and dry.

Nobody has passed 50 in the tournament more times than Misbah-ul-Haq, who has on four occasions.

The only time a team has reached 300 in an ODI in Adelaide since January 1995 came on February 15 when India scored 300 for 7 against Pakistan.

With 5,049 runs, Misbah has the most ODI runs in history without a century. The next closest is Wasim Akram, also of Pakistan, with 3,717.

Ireland's NRR (-1.014) is the worst of any team with a hope of qualification. Only UAE, Scotland and Afganistan have a worse rate.