England beat Sri Lanka by four wickets in match number 39 of the ICC Men’s T20 World Cup 2022 at the Sydney Cricket Ground (SCG) on Saturday, November 5. The win was a far from convincing one as England went from 75 for no loss to 111 for 5 in their chase of 142. However, getting over the finish line was what mattered the most. They got home in 19.4 overs to clinch a berth in the semi-finals from Group 1 and knock out defending champions and hosts Australia.

Sri Lanka won the toss and opted to bat in a game where pride was at stake for them, having been eliminated from the semi-final race. They began well to reach 32 for no loss after three overs, but it all went downhill for them after that. Kusal Mendis perished to Chris Woakes for 18, pulling a short ball to the fielder in the deep.

Nissanka batted brilliantly at one end, contributing 67 off 45 balls. His knock featured two fours and as many as five sixes, another demonstration of his talent. However, around him the Sri Lankan innings just fell apart. Dhananjaya de Silva holed out against Sam Curran for 9, Charith Asalanka (8) top-edged Ben Stokes to point. 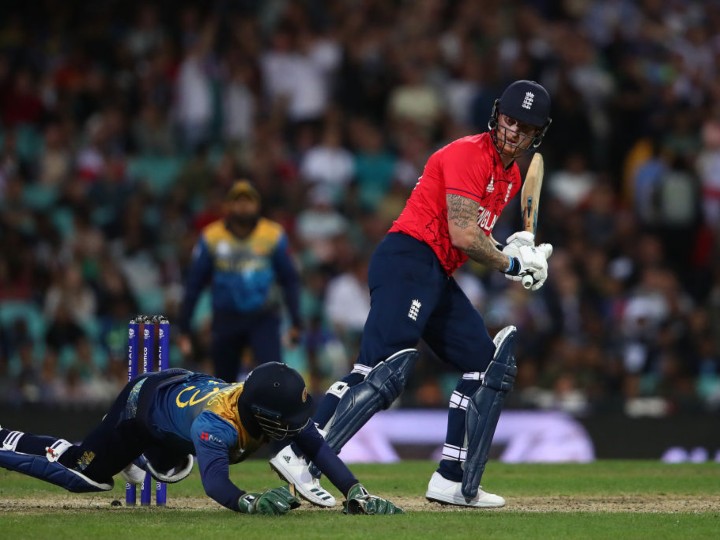 Nissanka’s innings came to an end in the 16th over then he was undone by Adil Rashid (1/16) and gave a catch in the outfield. Mark Wood (3/26) helped himself to three wickets at the end, dismissing Dasun Shanaka (3), Bhanuka Rajapaksa (22) and Chamika Karunaratne (0). Also, Wanindu Hasaranga was run-out for 9 as Sri Lanka managed only 141 for 8.

In the chase, England got off to a flyer as Alex Hales and Jos Buttler added 75 for the opening wicket. Hales slammed seven fours and a six in his dominant innings, while the England captain was sedate, striking two fours and a six. The partnership was broken when Buttler (28 off 23) miscued Hasaranga to deep midwicket. Hales (47 off 30) fell soon after, chipping a return catch to Hasaranga.

Dhananjaya took out Harry Brook (4) and Moeen Ali (1), while Lahiru Kumar dismissed Liam Livingstone (4) and Curran (6). However, Ben Stokes brought all his experience into play and guided England into the semi-final. Coming in at No.3, he remained not out till the end, 42 off 36. His knock featured only two fours, but significantly, he stayed firm, which is what England needed.

Speaking after the game, England captain Buttler admitted, “Didn't enjoy that match, how close it was. We just had to find a way to win that game.” He, however, praised Stokes and added, “These situations are built for him, he can play a lot of roles for us in this T20 setup. They got off to a really good start, and we felt the wicket would play that way since it was a used wicket. But the way Adil Rashid got us back was wonderful.”

Rashid was named Player of the Match for his figures of 1/16 from four overs.