Every year, the Indian Premier League brings into focus new talent, that are seen at with hope for the near future.

Every year, the Indian Premier League brings into focus new talent, that are seen at with hope for the near future. And, while a number of players have utilised the league to further their careers, some others have fallen by the wayside after briefly flickering. We look at five of them.

Swapnil Asnodkar: The batsman from Goa played for Rajasthan Royals in the inaugural edition in 2008, and formed a formidable opening combination with Graeme Smith. He played seven matches that season, and scored 244 runs at an impressive average of 35, and an equally good strike rate of 127. In fact, in his very first match against Kolkata Knight Riders, he blasted 60 runs from 34 balls. As a pair, he and Smith scored 418 runs at an average of nearly 60. Their partnership was instrumental in Rajasthan winning the inaugural edition of the IPL in 2008. 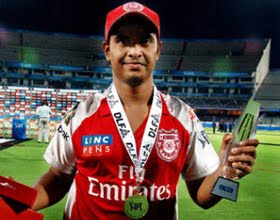 Paul Valthaty: An unknown player became a rockstsar out of nowhere thanks to the IPL. He was in peak form during the 2011 season. In a match against then defending champions Chennai Super Kings. Valthaty blasted an unbeaten 120 not out from merely 63 balls as Punjab chased 189 easily. As if to prove his hundred wasn't a fluke, he blasted 75 from 47 balls in the very next match. That's not all, he completed a perfect all-round show by claiming four wickets with the ball. This was followed by another knock of 46 from just 31 balls. Most opponents seemed clueless in the face of Valthaty blast. Alas, it was too good to last.

Yusuf Abdulla: A former left-arm fast bowler from South Africa, Abdulla gained temporary fame in the 2009 season, playing for Kings XI Punjab. Chosen as a replacement player, he impressed with 14 wickets in the tournament, which came at a very good average of 17.2. Abdulla's accuracy and, especially his yorkers, got him a lot of wickets. He seemed like a fast bowler, who could have made a serious impression playing for South Africa. But, injury and poor form ruined his career. Unable to deal with the problems, he announced his retirement during the 2010/11 season.

Manpreet Gony: A hard-hitting batsman lower down the order, and a brisk medium pace bowler, Gony made his name as an all-rounder for Chennai Super Kings in the earlier editions of the IPL with consistent performances. In the very first IPL in 2008, he was among the leading wicket-takers in the event with 17 scalps. With the bat too, he played a number of key cameos as Chennai ended up as runners up in the event. He went on to play ODIs for India, but without much success. Subsequently, his performances in the IPL also waned. He played for Punjab in 2013, and blasted 42 from 18 against KKR. Not a lot has been heard about him since at least not for cricketing reasons.

Tirumalasetti Suman: The Hyderabad batsman found his moment in the sun briefly during the 2009 edition, where he played for the now-defunct Deccan Chargers. Batting in the top and middle order, Suman was constantly among the runs for Deccan Chargers, scoring briskly at key moments. He was not always spectacular, but what he did was ensure the run rate was not affected, and became among the most effective batsmen for his side. His efforts are remembered specifically since Chargers went on to win the edition. Since, Suman has played for other franchises, but has failed to repeat his success.