Out of favour India opener Gautam Gambhir will be the latest Indian to have a county stint. The left-hander’s decision to sign up for Essex is a smart one at a time when there is no domestic cricket being played in India.

Out of favour India opener Gautam Gambhir will be the latest Indian to have a county stint. The left-hander’s decision to sign up for Essex is a smart one at a time when there is no domestic cricket being played in India. It is also crucial in the context that India have the big tour of South Africa coming up later this year. As of now, the southpaw is not in the scheme of things, but with some good performances for Essex at least he can keep him name his contention for a comeback.

Although he has been out of the Indian team for a while now owing to poor form, the doors are not completely shut for Gambhir yet. Shikhar Dhawan has made one opening spot his own in all formats of the game. And while Rohit Sharma is slowly but surely showing a lot of assured presence out in the middle in the one-dayers, the second opening slot is still up for grabs in Tests. Virender Sehwag isn’t doing anything to warrant a comeback, and Murali Vijay’s consistency remains a question mark even after him being around the international circuit for a few seasons. 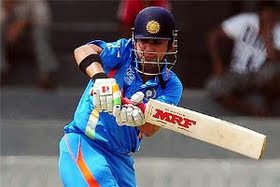 Things will still be tough for Gambhir since he will have to play exceedingly well to reclaim his spot at the top of the order. But, at least he has got a chance to stake a claim, and must now make the most of the god-sent opportunity. Gambhir should take inspiration from the way his teammate Zaheer Khan made his international return with a bang a few years back. Khan struggled for a couple of seasons in international cricket, losing his rhythm, and was eventually axed from the side at a time when he should have been at his peak.

Instead of sulking, Khan chose to hone his skills in county cricket for Worcestershire. He picked up ten wickets in his debut game against Somerset, and nine wickets in an innings against Essex. Khan swung the ball like a pro, and gained back his lost confidence. In fact, when he returned to the international arena following his county stint, he was a different bowler, a much improved one. He had almost perfected the art of reverse swing, and for the next couple of years, was among the best pace bowlers in the world, winning many a games for India with his stupendous bowling.

Gambhir is still only 31, which means he still has a few years of cricket left in him. He has caused his own downfall by taking potshots at skipper MS Dhoni, which has caused a sort of rift in the side. It has definitely impacted his game since he hasn’t been comfortable at all at the crease over the last couple of seasons. He doesn’t need much more to inspire him than vie for the opening spot for the tour of South Africa. For that though he will have to grab his chance with both hands at Essex.