Bumrah no ball was the turning point: Pothas

Sri Lanka coach Nic Pothas feels that the no-ball dismissal of Upul Tharanga by Jasprit Bumrah was the turning point of the match in the opening ODI of the series at Dharamsala.

“I firmly believe that there were two massive moments in the game. The toss was one and the no-ball to Upul Tharanga. We are suddenly 15 for three and that is a hugely different situation. We have looked at two situations where for me they sort of defined the day,” Nic Pothas said. 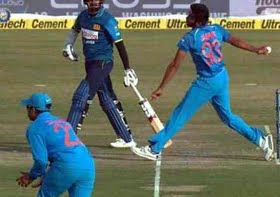 India dismissed Danushka Gunathilaka (1) and Lahiru Thirimanne (0). Tharanga on 11 was caught by Dinesh Karthik in the gully but was reprieved as Bumrah overstepped. This was a repeat of the Champions Trophy final.

Indian skipper Rohit Sharma however did not agree. “We lost the game with the bat and not with the ball. It will be unfair to single out one individual especially a bowler. I think we as a batting group failed to tackle the situation. I wouldn’t say it cost us dearly because there was not enough runs on the board. If we would have posted 180 or 190 it would have been different, but defending 110, you can hardly do anything except with the new ball to get three or four wickets and bounce back,” he said.