MS Dhoni produced what could easily be one of the greatest ever knocks in the history of ODI cricket to help India pull off a miraculous win over Sri Lanka to clinch the Celkon Mobile Tri-Series. Dhoni steered India to a nerve-wrecking one-wicket win with just two balls to spare. 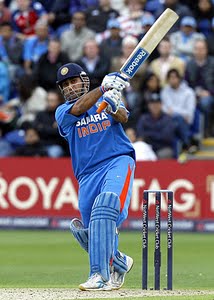 MS Dhoni produced what could easily be one of the greatest ever knocks in the history of ODI cricket to help India pull off a miraculous win over Sri Lanka to clinch the Celkon Mobile Tri-Series. Dhoni steered India to a nerve-wrecking one-wicket win with just two balls to spare. With wickets falling at the other end, Dhoni worked hard to take the match till the last over with 15 to get and backed himself to get that by smashing a six, a four and then a six against an inexperienced Shaminda Eranga to wrap it up in style. Dhoni scored 45 not out from 52 balls with 5 fours and 2 sixes as India chased down the small target of 203 with quite a lot of fuss.

India had a tremendous start with the ball with R Vinay Kumar often going past the bat with the lateral movement. It was Bhuvneshwar who struck first having Upul Tharanga caught behind in the 7th over with SL scoring only 27 runs on the board. In the 14th over, Bhuvneshwar in his second spell had Mahela Jayawardene (22 from 28 balls) caught nicely at slip with the latter playing a nothing shot to a widish away going delivery to make it 49 for 2.

Sri Lanka got a partnership going for the 3rd wicket between Kumar Sangakkara and Lahiru Thirimanne. The pair took Sri Lanka to 171 by the 38th over before Lahiru Thirimanne miscued a pull off Ishant to get caught at mid off. The left-handed Thirimanne scored a slow 46 from 72 balls with 4 fours. Within two overs, India got the big fish Kumar Sangakkara playing a rash heave off Ashwin to mid wicket to reduce SL to 174 for 4. It was potentially a turning point in the game with Sangakkara looking very good for his 71 which came in 100 balls with 6 fours and a six.

Sri Lanka collapsed after Sangakkara’s exit with the remaining batsmen throwing away their wickets. From a strong position of 171 for 2, Sri Lanka collapsed to 201 all out in 48.5 overs. The ball did turn square and the bounce was very uneven and it was Ravindra Jadeja who exploited it to the fullest to take 4 for 23 in 7.5 overs. Bhuvneshwar Kumar had an indifferent start yet managed figures of 8-4-24-2 while there were a couple of wickets each for Ishant and Ashwin.

India chasing just 202 started off very slowly and let Sri Lanka get back into the game when Shikhar Dhawan and Virat Kohli got out in the space of two overs. Dhawan was bounced out by Eranga with the seamer getting the left-hander to glove his snorter to the keeper. Kohli was forced to edge the same bowler to the keeper with one that held its line to have India at 27 for 2 in the 11th over.

The World Champs were steadied after that with Rohit Sharma and Dinesh Karthik putting up 50 runs for the 3rd wicket. Karthik was dismissed by Herath in the 23rd over when the right hander edged a flashy cut to slip where Jayawardene held onto a reflex catch. India were lucky to get another decent partnership going, 62 runs for the 4th wicket between Rohit and the positive looking Suresh Raina.

After doing all the hard work of taking blows on the body, Rohit Sharma departed with 58 (from 89 balls with 5 fours and a six) to his name. Rohit was unlucky to get an unplayable delivery from Herath which stayed very low. In three overs time, it was match on as Raina played a terrible shot aimed to go over mid off but ended up in the gloves of the keeper off Suranga Lakmal to leave India at a delicate 145 for 5 in 34.1 overs. Raina scored 32 in 27 balls which was a crucial cameo but nowhere enough for India to get home.

Everything now depended on MS Dhoni but he lost two key partners in Ravindra Jadeja and R Ashwin in consecutive deliveries in the 38th over. Jadeja was lbw going back to an arm ball and Ashwin also lbw shuffling far too across to a drifter from Rangana Herath. Bhuvneshwar Kumar didn’t trouble the scorers as he got out lbw to a slower yorker from Malinga but stayed in the middle to help Dhoni add 15 more runs to the total. Vinay Kumar did exactly the same as Bhuvneshwar, helping MS Dhoni to add up 17 runs before getting out slogging Mathews in the 47th over. What happened after that with India at 182 for 9 is purely a miracle thanks to the MS Dhoni special. The Indian Skipper got the Man of the Match award for his all-round efforts while Bhuvneshwar Kumar received the Man of the Series award.

Toss and Teams: MS Dhoni has miraculously returned back to fitness to lead India in the Tri-Series Finals. India has won the toss and asked Sri Lanka to bat first on a track that promises to be better for the batsmen unlike in the previous games.

Toss and Teams: MS Dhoni has miraculously returned back to fitness to lead India in the Tri-Series Finals. India has won the toss and asked Sri Lanka to bat first on a track that promises to be better for the batsmen unlike in the previous games.

India has made two changes with Dhoni and Vinay Kumar replacing Murali Vijay and Umesh Yadav. Sri Lanka has added some fire to their bowling by flying in Suranga Lakmal who replaces Dilhara Lokuhettige. The other change is Kusal Perera replacing Jeevan Mendis. And for the record, Mahela Jayawardene is playing his 400th ODI.