Having tasted contrasting fortunes in their opening games of the series, Australia and South Africa will go in with varied mindsets as they take on each other in the third match of the series on Tuesday.

Having tasted contrasting fortunes in their opening games of the series, Australia and South Africa will go in with varied mindsets as they take on each other in the third match of the series on Tuesday. While South Africa were shocked by hosts West Indies by four wickets, Australia got the better of the same opponents by six wickets. While South Africa will be seeking to taste their first win in the series, Australia will look to continue their winning run. The conditions in the two matches so far have aided the spinners, and the performance of the slow bowlers from either side could again decide the fate of the contest on Tuesday. The two games so far have been low-scoring encounters, and another one could be on the cards. 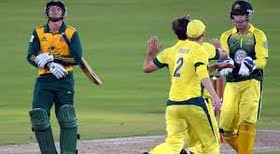 South Africa batted very poorly in the first game, and it cost them the match. The collapse towards the end of the innings was especially inexplicable. The top five did get starts, but failed to build on the same, and the lower order was just blown away by Sunil Narine. The Proteas will seek significant improvements in this aspect. Quinton de Kock, who has been in excellent form over the last few months, would look at the failure in the previous match as a rare off day. He and Hashim Amla will be keen to get the side off to a confident start against the Aussies. Rilee Rossouw got a half-century against West Indies, so he would like to continue the good work.

All eyes will again be on skipper AB de Villiers as the South African genius steps on to the field. He has been in stupendous form lately, and would be raring to make a contribution against the world champions. Then, there are also Faf du Plessis and JP Duminy, who can make a difference with the bat. In the all-round department, they will be looking up to Chris Morris to come up with worthy contributions with bat and ball. In the bowling department, they will again department heavily on the spin duo of Aaron Phangiso and Imran Tahir. Both did very well against West Indies to claim five wickets, but their batsmen hadn't given them enough runs to play with.

Spin was also Australia's main weapon as they overcame West Indies by six wickets in their opening game. Nathan Lyon picked up key wickets in the middle while Adam Zampa blew away the lower order. Australia will look to unleash the duo on the South African batsmen as well, and hope they again come unstuck. Apart from the spin duo, left-arm spinner Mitchell Starc also made an impressive comeback from injury. He will also be a threat to the South African batsmen. The likes of Mitchell Marsh can also prove to be dangerous on their day, so South African batsmen must take him lightly at their own peril. In Josh Hazelwood and James Faulkner, they have another quality pacer in the team.

Australia's batting is also their strong point. In David Warner, they have a batsman who is in the form of his life. It was his half-century against West Indies that guided them to an easy win. Warner's marvellous run just refuses to end. But, Australia's weren't at their best against the Windies so they clearly have some improvements to make. Better will be expected from the likes of Usman Khawaja, George Bailey and skipper Steven Smith apart from all-rounders Marsh and Glenn Maxwell. In the bowling, Australia were a bit untidy as a number of unnecessary extras were conceded. They will definitely have the upper hand against South Africa, but the Proteas would be desperate to get on the board as well.