Aussie batsmen will have a point to prove at Hobart

Following the controversial abandonment of the Sydney ODI on Sunday, Australia lost any chance they had of winning the series. All they can do now is square the series if they manage to clinch the Hobart one-dayer on Wednesday.

Following the controversial abandonment of the Sydney ODI on Sunday, Australia lost any chance they had of winning the series. All they can do now is square the series if they manage to clinch the Hobart one-dayer on Wednesday. Even if they win, it would be a somewhat disappointing result, but a loss would mean a 3-1 drubbing for Australia at home, which would be a bigger embarrassment considering their excellent record at home over the years in all formats. Sri Lanka are a confident lot at the moment. This isn’t the same side that was thrashed in the Tests although quite a few of the personnel have been retained. 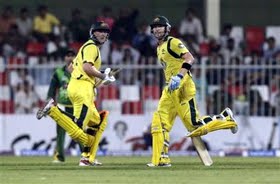 Australian batsmen’s struggle against Sri Lankan’s pacers has been the chief reason behind the home side finding themselves on the back foot. Being the hosts, the Aussie batsmen were expected to cope with the moving ball with ease. However, credit to the Sri Lankan bowlers for outsmarting them with an extremely cunning display. Nuwan Kulasekara has been the chief cause of grief for the Australian batsmen, who have surprisingly been short on ideas over dealing with his swinging deliveries. Significantly, he has been supported very well by the likes of Angelo Mathews and, in particular, Lasith Malinga, who has had no qualms in playing second fiddle.

Under the circumstances, the Australian batsmen would be under intense pressure to make a mark at Hobart. Almost everyone from the Aussie batting line up will have a point to prove as the home side look to save some face. David Warner and Phillip Hughes have been among the runs on separate occasions, but they must combine to give Australia a good start in the crucial final one-dayer. If the duo can survive the early onslaught from the Sri Lankan opening bowlers, it would automatically make the job a lot easier for the batsmen to follow.

While onthe subject of the Australian middle-order, the players themselves would be aware that their line-up isn’t as brittle as the Lankan pace bowlers have made them out to be. Skipper Michael Clarke has got a couple of excellent deliveries in the two games he has played, but it is also a fact that his technique could have been a bit tighter. Being the leader, he would be keen to make a statement of intent. At the same time, the performance of the other batsmen would be equally critical.

David Hussey, George Bailey and Matthew Wade, all have the proven ability of making big runs. All they need to do is resist for a while, and get their eye in before going for aggressive strokes. On form, the Lankans definitely hold the edge, but Australia are known to hit back strongly when they are under fire. When cornered, the Kangaroos have traditionally been doubly dangerous, but whether the current squad (read their batsmen) possessesthe skills for that kind of a combat remains to be seen. Hobart will give us the answers.