Australia's vice-captain David Warner is an upset man. And no, it's not because he's not getting runs.

Australia's vice-captain David Warner is an upset man. And no, it's not because he's not getting runs. On the contrary, he has been in exceptional form against Pakistan, scoring runs at a blistering pace, and creating records. But, it's Australia's scheduling for the next couple of months that is bothering him. The Aussies will rather incredibly be playing a T20 at home just a day prior to the Test series commencing in India. And, Warner is clearly not pleased. In no uncertain terms, he has referred to the schedule that has been put in place as "very, very disturbing". 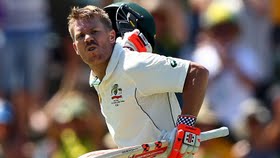 As per the schedule, the three T20s in Australia will be held at Melbourne, Geelong and Adelaide on February 17, 19 and 22 against Sri Lanka while the first Test in India will start on February 23. As a result, a number of key Test players won't be able to take part in the T20s, as they would be in India. The list includes, apart from Warner himself, Steven Smith, Usman Khawaja and Mitchell Starc. The Test team will have a robust preparation, in the run-up to the first Test in Pune. There will be a two weeks training on spinning pitches at the ICC Academy in Dubai, which will be held before the team flies out to India to take part in the first warm-up game in Mumbai.

Sharing his views on the poor scheduling, Warner told Fox Sports, "Scheduling is obviously Cricket Australia's area. They play the big role in putting that on. For me, it's about going out there and playing the game and not worrying too much about that. In saying that, it is very, very poor scheduling. To have your Test team going away to play a Test match... it doesn't make any sense to us."

He did not stop there and went on to add, "I don't like it. Those of us who are part of the T20 team have a bigger goal and bigger picture, and that is to win a World Cup. You want to be putting your best team on the park all the time. At the end of the day, you've got Big Bash and IPL."

Elaboration on how things are tougher for the players who feature in multiple formats, Warner stressed, "If me, Smithy, Starcy, Ussy, Shaun Marsh -- all these guys that are in the Australian T20 team from the previous World Cup -- if we are not playing any T20 cricket in Australia where the next World Cup is meant to be, it becomes quite a tough thing for selectors to work around. We have one-day stuff where you can put your foot down and prove some things, but for me it's about playing my best in any of the three formats that you play."

Australia will host the World T20 in 2020. This is one title that has eluded them. Their best effort was being runner-ups in 2010, when they lost to old rivals England.