West Indies won the Second ODI at Providence in Guyana by 37 runs to level the 5-match Series 1-1. A timid batting approach from the Pakistani top order saw the visitors to fail chasing a modest target of 233.

West Indies won the Second ODI at Providence in Guyana by 37 runs to level the 5-match Series 1-1. A timid batting approach from the Pakistani top order saw the visitors to fail chasing a modest target of 233. Opening batsmen Ahmed Shehzad and Nasir Jamshed were guilty of playing it out like a Test match to make the equation near impossible for the rest of the batting line-up.

Asked to bat first, West Indies had a terrible start losing Chris Gayle for a duck driving loosely at an away swinger from Mohammad Irfan in the very first over. Johnson Charles (31 from 51 balls) and Darren Bravo (54 from 81 balls with 6 fours) steadied the ship for West Indies before and after a rain break. The hosts were decently placed at 123 for 2 in 32 overs before a double strike from Saeed Ajmal pegged them back.

West Indies were in further trouble at 150 for 5 in the 39th over when Skipper Dwayne Bravo and Kieron Pollard got together to put up a crucial partnership of 70 runs. Pollard scored 30 from 27 balls while Dwayne Braco remained unbeaten on 43 from 52 balls. West Indies finished with 232 for 8 thanks to some erratic Pakistani bowling which conceded 38 extras! Shahid Afridi was the pick of the bowlers with 2 for 29 in 10 overs. 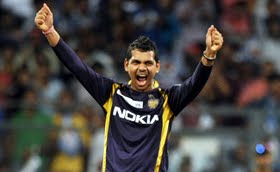 Pakistan in their run chase was very sedate with Ahmed Shehzad and Nasir Jamshed playing out dot balls at will. Fast bowler Kemar Roach bowled four maidens at the start on the trot to leave Pakistan on the backfoot. It was a struggle for the other batsmen as well with Misbah-ul-Haq scratching around to collect 17 from 41 balls before he was cleaned up by Sammy .

A well set Nasir Jamshed (54 from 93 balls with 4 fours and a six) perished soon after scoring his fifty, caught at deep mid wicket to leave Pak at 137 for 5 in 36.2 overs. Hero of the last match – Shahid Afridi threw his wicket away attempting a wild slog off Sunil Narine to get stumped out to end the visitors’ hopes. Pakistan were eventually bowled out for 195 in 47.5 overs with Umar Akmal helping himself to a 46-ball 50. Sunil Narine was the most successful bowler for the hosts taking 4 for 26 in 10 overs and he was the Man of the Match as well.

The teams now move onto St.Lucia to play the remaining three ODIs after a gap of two days.

Toss and Teams: Pakistan have won the toss and asked West Indies to bat first in the Second ODI at the Providence Stadium in Guyana. Both the sides remain unchanged. Pakistan lead the 5-match series 1-0.