Pujara the difference between the teams: Paine

India captain Virat Kohli termed Cheteshwar Pujara as priceless as the visitors eked out a close 31-run win at Adelaide on Monday.

India captain Virat Kohli termed Cheteshwar Pujara as priceless as the visitors eked out a close 31-run win at Adelaide on Monday. Pujara was the star of the show with 123 in the first innings and 71 in the second.

"We were down and out at lunch on day one. His belief, grit and determination kept us in the game, he brought us back beautifully. The game was poised equally on day two. We knew runs on the board, their position playing at home, they'll obviously be a bit tentative and we cashed in on that,” Kohli was quoted as saying in an ESPNCricinfo report. 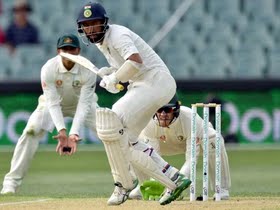 “Any lead would have been gold and we built on that with a couple of partnerships in the second innings, particularly Pujara and Rahane. When they bat together like that they are our most solid pair. They gave us that safety for the bowlers to go out and get ten wickets. It took grit and determination from both of them to put us past Australia where it was hard for them to chase that total down,” Kohli further explained.

Australia captain Tim Paine also admitted that Pujara’s two knocks meant a lot in the context of the game. "Pujara was probably the difference between the two sides. It's what you want from your top 5-6 batters, hundreds and a lot of balls into our bowlers as well. He made us work very hard to get him out and we can take a lot from that for our batting group."