India asked to save game after Kallis ton

The young Indian batting brigade has the challenge of saving an overseas Test on the final day at Kingsmead. The visitors have already lost two wickets after conceding a first innings lead of 166 runs.

The young Indian batting brigade has the challenge of saving an overseas Test on the final day at Kingsmead. The visitors have already lost two wickets after conceding a first innings lead of 166 runs. India at stumps on Day 3 are 68 for 2 having negotiated 36 overs tonight. At the crease are Cheteshwar Pujara (32*) along with Virat Kohli (11*) with another 98 runs needed to make SA bat again.

The weather forecast is predictably good for the final day which means that India will have to bat for two full sessions atleast to save the game. Scoring runs will be of utmost importance as well for India to ensure that SA will not have enough time to chase down a target.

India had a bad start with Vernon Philander producing a beauty to edge out Murali Vijay to first slip in the 6th over. Shikhar Dhawan and Cheteshwar Pujara battled hard after that to see through the new ball. Dhawan having done all the hard work got out trying to whack Robin Peterson over mid wicket. However, Dhawan (19 from 87 balls) found Faf du Plessis leap up in the air and hold onto a one handed catch at short mid wicket. 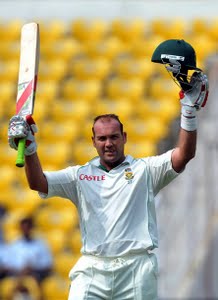 Earlier, South Africa wasted a bit of time in the final session by prolonging their first innings. The hosts could add just three more runs before losing their remaining three wickets. Faf du Plessis was run out by a direct throw from Rohit Sharma while last man Morne Morkel was caught and bowled by the diving Jadeja. South Africa were bowled out for 500 with their innings lasting 155.2 overs. Ravindra Jadeja worked hard to take 6 for 138 in 58.2 overs.

Update at Tea on Day 4: An early Tea was taken at Durban because of rain. South Africa have raced away to 497 for 8 to stretch their lead to 163 runs. Robin Peterson wasted no time in the post lunch session, scoring a breezy 61 from 52 balls which included a switch hit for a six. Faf du Plessis helped himself to 41*. Just the one wicket fell in the second session that of Peterson, who was caught at mid on, miscuing a big shot off Zaheer Khan. Peterson had put up a frustrating stand of 110 with du Plessis in just 18 overs. India had finally taken the second new ball in the 147th over but even that couldn’t curtail the scoring.

Update at Lunch on Day 4: Jacques Kallis eased to a century in his last Test. It is also the 45th of his Test career and he is the 5th South African to score a century playing in the last Test. And against India, it is the 7th Test century for Kallis. At Lunch on Day 4, South Africa are 395 for 7 with a first innings lead of 61 runs.

There isn’t much left in this match with the weather looking pretty bad at Durban. The prospects of having two full sessions after lunch do not look promising.

India frustrated the hosts by not taking the second new ball and kept on persisting with the old soft ball. Jacques Kallis, who seems to have strained his hamstring got out to Ravindra Jadeja in a slog sweep, across the line and against the turn. Kallis walked off with 115 (from 316 balls with 13 fours) in what is likely to be his last ever Test knock.

Dale Steyn missed out on a half century by six runs when he edged his drive off a widish full ball from Zaheer to the keeper. SA have got Faf du Plessis (5*) and Robin Peterson (5*) at the crease during the lunch break.