In cricket, it doesn’t take much for you to go from hero to villain. Just a few days ago, in the Super 10 game against Australia, Yuvraj Singh was the man of the match following a brilliant display with the bat.

In cricket, it doesn’t take much for you to go from hero to villain. Just a few days ago, in the Super 10 game against Australia, Yuvraj Singh was the man of the match following a brilliant display with the bat. He had struggled earlier in the tournament, but this innings seemed to have brought his confidence back on track. It wasn’t to be case though as Yuvraj went back into his shell. Unfortunately, he reserved his worst for the last, and his crawl in the final went a long way in India losing the crown. 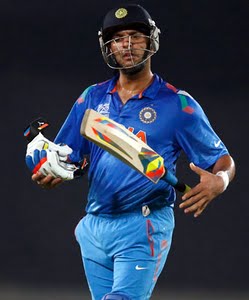 Admittedly, Yuvraj was among the major culprits of India’s loss, but the criticism of the left-hander has been a bit too harsh, and undeserved. The stone-pelting at his home in Chandigarh was really uncalled for. Irrespective of what is at stake, cricket is a sport after all, and every cricketer is bound to have his ups and down. Yuvraj struggled without doubt, and it was the wrong occasion to do so, but it was clear watching him bat that he was helpless – the southpaw was trying his best, but just could not time the ball as well as he desired to.

In spite of what transpired in the final at Dhaka, it would be pertinent to remember that Yuvraj is no ordinary cricketer. In fact, he is the man who has played a stellar role in both of India’s world titles. In the 2007 World T20, he set the tone by hitting six sixes in a game against England at Durban, and continued to play some blistering knocks in the remainder of the tournament. During the 2011 World Cup, he was unstoppable with both bat and ball, and picked up the man of the series as India lifted the trophy after a gap of 28 years.

The 32-year-old from Punjab has been part of Indian cricket for over a decade now, and has represented the country with distinction. Yes, he has failed to deliver in recent times, but that doesn’t devoid him of the respect he deserves as one of the senior-most players in the country. Of course, a team cannot carry a non-performing player with it for too long. There is no doubt about the fact that Yuvraj is low on confidence, form and fitness at the moment. So a lot of thought should be given to his place in the team.

The best thing for now would be to give Yuvraj a break, and help him regain form in domestic cricket. Although he has already been dropped from the Test and one-day side, it would be too early to write off Yuvraj. With the 2015 World Cup coming up in Australia and New Zealand, India should give Yuvraj another chance to prove himself before they head for their title defence. Yuvraj is such a tremendous talent that India should be absolutely sure when the team for the World Cup is announced whether or not Yuvraj is in the scheme of things.