Chennai Super Kings held onto a 10-run win over Deccan Chargers despite a blistering 77 from Cameron White. The no.3 batsman for DC, Cameron White scored his 77 from 53 balls with 9 fours and 2 sixes before getting run out in the penultimate over leaving his team with 26 to get from 9 balls.

Chasing 161 to win, DC were in a nice shape at 77 for 2 in 10.4 overs. Like CSK, it was a struggle for the Chargers as the ball lost its shine and the slower bowlers made strokeplay difficult. In the end, Daniel Christian remained unbeaten on 28 (from 24 balls with 2 fours and a six) but not able to carry DC to victory. 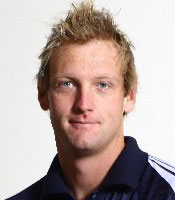 Hosts Chennai Super Kings worked extremely hard to reach a competitive total of 160 for 6 on a pitch that was slowing down considerably. There were just the 9 fours and 4 sixes scored in the CSK innings which means that big hitting wasn’t easy on the Chepauk pitch.

Dale Steyn bowled well for DC giving away only 25 runs in 4 overs though he couldn’t take any wickets.

Toss and Teams: MS Dhoni has won yet another toss and opted to bat first on a dry surface at the MA Chidambaram Stadium in Chennai against Deccan Chargers. The hosts Chennai Super Kings have brought back opener Murali Vijay. They have replaced Michael Hussey with swing bowler Ben Hilfenhaus.

Deccan Chargers on the other hand have brought back Daniel Christian in the place of JP Duminy.