As India get ready to take on West Indies and Sri Lanka in the tri-series in the Caribbean, we take a closer look at the records of Indian players in West Indies.

As India get ready to take on West Indies and Sri Lanka in the tri-series in the Caribbean, we take a closer look at the records of Indian players in West Indies.

Shikhar Dhawan: This is when the left-hander kicked off his career a few years ago. He would have mixed emotions of the place. He got 51 on debut, but subsequently had three failures in a row, with scores of 3, 4 and 11. Dhawan ended the series with 69 runs from four matches, and was immediately dropped from the one-day squad. He would like to set the record straight this time round. 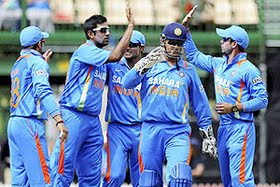 MS Dhoni: The Indian skipper has played 12 games in the West Indies, and has a reasonable record, having scored 306 runs averaging 34, with a highest of 95. Nine of those games have been against West Indies, in which he has chalked up 277 runs averaging 46.

Rohit Sharma: For a change, the Mumbai batsman’s numbers are impressive. In nine games in the Windies, he has amassed 272 runs at an excellent average of 54 with a highest score of 86 not out.

Virat Kohli: The India number three has featured in five games in the West Indies, and has tasted success, scoring 199 runs with a highest of 94, and a healthy average of 40.

Suresh Raina: This southpaw has had a poor record in West Indies. In 10 games, he has managed only 151 runs with a highest of 43 and an underwhelming average of 19. Raina would be keen to set the record straight when the tri-series gets underway.

Dinesh Karthik: The Tamil Nadu batsman has played four matches in the West Indies, and has scored 118 runs with a highest of 67 and an average of 39. Like always, he has promised a lot but delivered in installments. The Caribbean visit will thus be important for Karthik.

R. Ashwin: The offie has featured in only 2 matches in the Caribbean and has picked up a sole wicket, averaging 89. He would for sure feature in much more matches this time since he is now the established spinner in the side.

Ravindra Jadeja: This will be Jadeja’s second visit to the Caribbean island. Previously, he featured in a couple of games, but did not have much to do. He did not pick up any wickets and scored only seven runs. However, times have changed since, and Jadeja will, this time, have a prominent role to play in the eleven.

Ishant Sharma: The speedster doesn’t have a great record in the Caribbean island. In five games, he has managed to pick up only three wickets while averaging 66 with a best of 1/17.

Amit Mishra: He may not feature in the playing, but has tasted success in the Caribbean before. In five games, he has grabbed 11 wickets averaging 18 with a best of 4/31.

R. Vinay Kumar: He has played only one game in the West Indies, and has grabbed a wicket while averaging 46.

(This is the first trip to West Indies for all the other players in the team.)