The ICC annual awards were announced recently in which current Aussie skipper Michael Clarke emerged as the key winner, walking away with both the Test cricketer as well as the Cricketer of the year award.

The ICC annual awards were announced recently in which current Aussie skipper Michael Clarke emerged as the key winner, walking away with both the Test cricketer as well as the Cricketer of the year award. There were a few other strong contenders as well, including Indian skipper MS Dhoni as well as Hashim Amla and James Anderson, all three of whom have had to play significant roles in their team’s overall success during the 12-month period which was taken into consideration for the awards – September 2012 to August 2013. 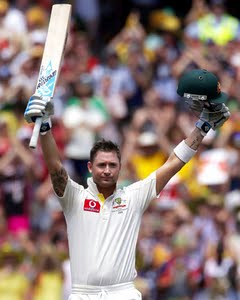 Come to think of it, the Australian side actually had a very poor time during this phase, losing a number of Tests and ODIs. This is one of the reasons Clarke’s selection as both the Test cricketer of the year as well as the cricketer of the year has been questioned by some pundits. After all, if you look at his ODI record during the period being judged, the Australian Test captain managed to feature only in seven one-day games, missing most of the others due to a chronic back injury. Even in these matches he managed only 129 runs averaging 21.50 with a highest of 37.

It was his Test performance then that essentially tilted the scales in his favour as far as both the awards were concerned. Clarke’s performance during the 12-month period in Tests being considered has been exceptional by any stretch of the imagination. In 14 Tests that he featured in during this period, Clarke amassed 1599 runs averaging 71 with as many as five hundreds. While these figures are amazing in itself, there are a couple of other major factors why Clarke piped the likes of Dhoni, Amla and Anderson to the post, though all three were in with a big chance themselves.

Firstly, two of the five hundreds Clarke registered were converted into double hundreds – 259 not out and 230 in back to back Tests at Brisbane and Adelaide. In addition, there was a score of 187, which he registered against old enemy England during the Ashes Test at Manchester. That’s not all, Clarke in fact registered a hundred against each of the opponents he faced during the 12-month period that was reviewed. He had one hundreds each against England and India averaging in the high 40s, two against South Africa averaging 144 and one against Sri Lanka while averaging 79.

It is true that Australia had a poor record in Tests during this very phase, but that couldn’t have been reason enough for the ICC to ignore Clarke’s magnificent performances. It must be remembered that Australia have actually lost out on a few key players like Mike Hussey and Ricky Ponting during the last year, and Clarke’s job has become that much difficult. In spite of the same, the latter hasn’t allowed his performances to dip. And so, while Clarke would have wanted his side to win a lot more games, the fact that he has been chosen as the ICC cricketer of the year proves that Clarke has tried his very best, at least as a batsman.