Jos Buttler was supposed to be out of form. But, on Friday against Pakistan, he smashed one of the most sensational one-day hundreds as England upset Pakistan once again to claim the four-match ODI series by a comprehensive 3-1 margin

Jos Buttler was supposed to be out of form. But, on Friday against Pakistan, he smashed one of the most sensational one-day hundreds as England upset Pakistan once again to claim the four-match ODI series by a comprehensive 3-1 margin. Buttler raced to his hundred off just 46 balls. He remained unbeaten on 116 from 52 balls, a knock featuring 10 fours and as many as 8 sixes at a strike rate of 223. Jason Ray hit a maiden century of his own while Joe Root chipped in with 71 as England amassed 355 for 5. Pakistan could only manage 271 in reply.

Pakistan bowlers were completely taken to task in the face of Buttler’s assault. After Ray had laid a wonderful platform with his maiden ton, Buttler was promoted to number four, a move questioned by some considering his prolonged lean slump. But, Buttler responded with one of the most smashing knocks in one-day cricket ever. While he drove with complete freedom knowing his team was already in a competent position, he also unleashed a series of scoops and reverse sweep to put the bowlers off the line. Pakistan’s bowlers, under pressure, responded with long hops and full tosses. 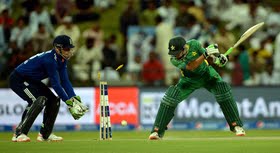 Although England were always favoured to win, briefly Pakistan put up good batting resistance. While Ahmed Shehzad could not contribute much, Azhar Ali and Mohammad Hafeez took the attack to the English bowlers. For a while, they even managed to keep up with the run rate. Skipper Ali, however, was dismissed for 44, caught and bowled by David Willey as Pakistan were set back. Hafeez continued the good work in the company of Babar Azam, but the run out woes for Pakistan continued as Azam did not respond to a quick single call, and Hafeez was left stranded.

Azam however continued to attack, and crossed his half-century. Shoaib Malik also batted brilliantly to raise his fifty at a strike rate of 150. He raced to 52 in 34 balls, with three fours and two sixes when Alex Hales pulled off a stunning catch to end Malik brilliance. Halex ran in from the boundary, and dived forward to hold the ball, just a few inches from the ground. With Adil Rashid having dismissed Azam and Mohammad Rizwan at the other end, Malik was Pakistan’s last hope. His dismissal left Pakistan at 228 for 6, and they crumbled to 271 all out in 40.4 overs.

Without doubt, the day belonged to England’s batsmen, Buttler in particular. The unbeaten 49 he made in the previous innings certainly gave the wicket-keeper batsman some confidence. Here he treated two of Pakistan’s best pace bowlers, Mohammad Irfan and Wahaz Riaz, with utter disdain. They two went for 64 and 70 respectively. Anwar Ali was smashed for 22 in one over, and he conceded 75. Earlier, Ray produced some striking hits in his 102 from 117 balls, with 8 fours and a six. By, the time he was dismissed, England had progressed to 194 for 2 in the 35th over. The stage was set for Buttler to take over.