Sri Lanka have added all-rounder Farveez Maharoof to their Test squad ahead of the first match against England in Cardiff, which begins on Thursday.

Sri Lanka have added all-rounder Farveez Maharoofto their Test squad ahead of the first match against England in Cardiff, which begins on Thursday.

Maharoof has showed impressive form playing as Lancashire's overseas player this year, scoring 196 runs including a century while he has also taken eight wickets at 30.25.

Although he was not named in Sri Lanka's original 16-man touring party, he played in the tour game against Middlesex as the likes of Kumar Sangakkara and Mahela Jayawardene had not then returned from Indian Premier League duty.

"Maharoof has been called up and is already with us," a Sri Lankan team spokesman told PA Sport. "He will be cover for one or two nagging injuries which we will be assessing." 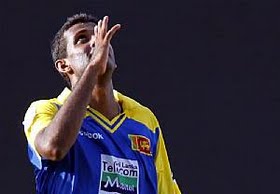 Sri Lanka play three Tests, following up their match in Cardiff with games in Lord's (3rd-7th June) and The Rose Bowl (16th-20th June).

Maharoof has played 20 Tests for Sri Lanka, his most recent match coming in 2007 against Australia in Hobart.

Sri Lanka have made an impressive start to the tour, beating Middlesex by four wickets in Uxbridge and then turning a huge deficit around to beat the England Lions in Derby.