India displayed a clinical performance on Thursday to wrap up West Indies second innings for 262 and thus register a comprehensive 63-run victory in the first Test at the Sabina Park to take a 1-0 lead in the series.

India displayed a clinical performance on Thursday to wrap up West Indies second innings for 262 and thus register a comprehensive 63-run victory in the first Test at the Sabina Park to take a 1-0 lead in the series. 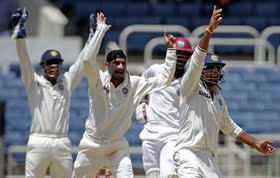 Needing 195 more runs to win with seven wickets in hand on the fourth day, West Indies lost six wickets for the addition of 95 runs in the morning session, while the last wicket stand of 39 runs between Devendra Bishoo (26) and Fidel Edwards (15) gave India a few jitters before the former was bowled by Suresh Raina to end the proceedings.

Ishant Sharma (3/81) and Praveen Kumar (3/42) repeated their first innings feat by taking three wickets each in the second innings as well. Amit Mishra also contributed with two wickets, while Harbhajan Singh and Raina chipped in with a wicket each.

Darren Bravo, with 41 runs, was the top scorer for the West Indies in their second essay.

After Thursday's win, India go 1-0 up in the three-match series, with the second Test scheduled to start next Tuesday at Bridgetown, Barbados.

Earlier, Praveen struck twice in two overs to give India a perfect start on the decisive fourth day.

The Indian swing bowler first bowled a confident-looking Bravo around his legs in the fourth over of the day and then got the experienced Shivnarine Chanderpaul (30) caught at covers by Raina.

Harbhajan provided India the third wicket of the day when he got Carlton Baugh, celebrating his 29th birthday, caught in the leg slip for a duck.

Though Harbhajan was turning the ball square, the incoming Windies' skipper Darren Sammy had other ideas on his mind. He took the attack to the off-spinner from the outset, hitting three consecutive sixes off his bowling.

But his audacious knock was cut short by Mishra, who took Sammy’s wicket on the very first delivery he bowled on Thursday.

The ball dipped at Sammy (25), who drove it with an open face that landed straight into the hands of VVS Laxman at covers.

Mishra then trapped Brendan Nash (9) right in front. The batsman tried to pull a short-pitched delivery but completely misjudged the length of the ball.

Ravi Rampaul hit a few lusty blows (six fours and a six) in his 34-run knock but his heroics were cut short by a rising delivery from Sharma that kissed his gloves before being pouched by MS Dhoni.

India owe this win largely to the 'Man of the Match' Rahul Dravid's 112 in the seconds innings, along with the crucial partnership between Raina and Harbhajan after the visitors were reduced to 85/6.