Australia should perform better in ODIs

The 3-0 loss in the Ashes will be very difficult to swallow for the Australians, who pride themselves on winning most contests againstold enemies England. But, that is history now, and Australia must look forward to conquering the one-day series, a format in which they are a lot more at home these days as opposed to the traditional five-day version.

The 3-0 loss in the Ashes will be very difficult to swallow for the Australians, who pride themselves on winning most contests againstold enemies England. But, that is history now, and Australia must look forward to conquering the one-day series, a format in which they are a lot more at home these days as opposed to the traditional five-day version. There were signs of progress in the short T20 series itself, which was tied 1-1. Of course, Australia would have liked to win both games, but the end result wasn’t a bad one, coming in the wake of the Ashes disaster.

There are a few Aussie players of whom a lot would be expected in case the visitors hope to end up on the winning side in the one-day series. There would be heightened expectations from Aaron Finch following his record-breaking innings in the first T20 last week. One-day cricket is a different format though, and Finch would have to adapt his game accordingly to succeed. He should learn from the example of David Warner, who had a sensational start to his T20 career, but hasn’t quite managed to flourish at the one-day stage, which has now led to his axing.

Like it was in the Tests, big scores would be expected from veterans Michael Clarke and Shane Watson. The duo could come up with only a solitary century each in the Ashes, which represents a failure, and thus they would be keen to make amends of sorts by doing well in the one-dayers. A victory cannot wipe out the wounds inflicted by yet another Ashes loss, but it would make them feel better for sure. Considering the vast amount of experience they possess, both Watson and skipper Clarke would be disappointed if they do not come up with the goods in the 50-over format. 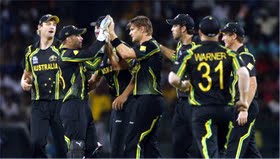 At the same time, the contributions by the limited overs specialists would also be equally significant. There would be additional responsibility on T20 skipper and ODI vice-captain George Bailey now that Mike Hussey is not around to shore up the middle order. To be fair to Bailey, he has made excellent use of his domestic experience to come up with some high-quality fighting knocks for the side, but the time has come for him now to carry on to get bigger scores, and not just contribute half-centuries. Bailey has the talent; he only needs to transform it into big runs.

Glenn Maxwell is one name who needs to do serious justice to his reputation. He is known in cricketing circles as a highly dangerous batsman who can clobber the bowlers to all parts of the ground. The reputation even earned him a million-dollar IPL contract, but Mumbai Indians did not even need his services to clinch their maiden title. Maxwell has so far only played 13 ODIs, so it is too early a pass a judgment on him. But his progress would be keenly followed for sure. If Australia have to overcome England in the one-dayers, they would need their veterans as well as their youngster to stand up and deliver.