Mumbai Indians captain Rohit Sharma, on Sunday said that IPL is a funny tournament where any team can beat anyone on a given day.

Mumbai Indians captain Rohit Sharma, on Sunday said that IPL is a funny tournament where any team can beat anyone on a given day. Sharma said so after leading Mumbai to victory against Kolkata Knight Riders, knocking the latter out of the tournament.

“IPL is a funny tournament, any team can beat the other on a day and we want to take few tiny steps,” Rohit was quoted as saying in a PTI report. 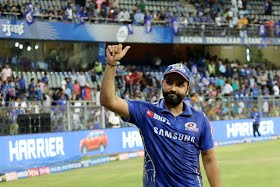 "In all the three trophies that we’ve won, the boys have picked themselves up in the business end,” Rohit went on to add after Mumbai topped the table thrashing KKR.

Speaking specifically about Sunday's win, the MI skipper gave credit to the entire team.“It was the team effort that pleased me the most. We don’t depend on a few individuals to take us through, there are a lot of characters who put their hand up and took us through.

“Today, the entire bowling attack used the pitch and their variations really well to keep a line up like KKR quiet," he further said in the PTI report.

All-rounder Hardik Pandya, was named man of the match for his 3 for 20. Known more for his batting, Hardik said he was happy to do well with the ball.

“To be honest as a batsman, there is nothing better than hitting a ball. People don’t expect a lot from my bowling, neither do I, but it feels nice,” he said.