Taylor ton wraps up series win for hosts at Hamilton

New Zealand wrapped up a series win of 3-0 at the Seddon Park in Hamilton with one more game to go. Team India failed to contain the Kiwis in defending a target of 279.

New Zealand wrapped up a series win of 3-0 at the Seddon Park in Hamilton with one more game to go. Team India failed to contain the Kiwis in defending a target of 279. The Kiwis got home comfortably with a 7-wicket win with two overs to spare. Ross Taylor led the run chase scoring his 9th ODI century.

Batting first, India got off to a very slow start while losing a couple of early wickets. Virat Kohli, in the new role of an opener departed in the 4th over for 2 top edging a pull shot off Southee. Ajinkya Rahane, in at no.4, was also out pulling the short ball, falling to Kyle Mills for 3. A solid partnership after that between Rohit Sharma and AT Rayudu steadied the ship for India.

Rohit Sharma scored 79 from 94 balls which included four superb sixes along with 6 fours. The Kiwis gave him an early life putting down an edge from Rohit Sharma in the slips. Rohit was the architect of the Indian innings, putting on 79 with Rayudu and then 41 with Dhoni. It was a soft dismissal down the legside for Rohit Sharma off Kane Williamson. After his exit, MS Dhoni and Ravindra Jadeja did exceedingly well to power India to 278 for 5 courtesy of their strong 136-run unbroken stand in 17.3 overs. Dhoni smacked 79 not out from 73 balls with 6 fours and 3 sixes. At the other end, Ravindra Jadeja on his new found confidence with the bat, made a superb 62* from 54 balls with 8 fours and 2 sixes. 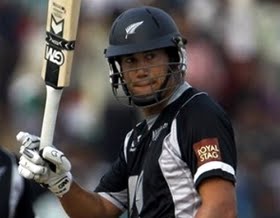 The total of 278 wasn’t enough at all for the Kiwis especially after the openers got them past the 50 in a little over 7 overs. Varun Aaron and Mohammed Shami removed the Kiwi openers in succession to get things back in control. The spin twins Ashwin and Jadeja strangled the scoring rate thereafter but failed to get any wickets. New Zealand as a result stayed in the hunt gathering a match-winning stand of 130 between the in-form Kane Williamson (60 from 82 balls) and Man of the Match Ross Taylor.

A 92-run stand for the unbroken 4th wicket finished the game for the hosts in style. Taylor scored an unbeaten 112 from 127 balls with 15 fours. Giving him company was the New Zealand Skipper Brendon McCullum who scored 49* from 36 balls with 3 sixes.

Toss and Teams: India have won the toss for the fourth time in a row but this time they have decided to bat first. The visitors have also made two changes with AT Rayudu and debutant Stuart Binny replacing Shikhar Dhawan and Suresh Raina. Virat Kohli is going to open the batting in the place of Dhawan.

New Zealand, who are just a win away from sealing the series, have made two changes as well with all-rounder Jimmy Neesham and Kyle Mills replacing Corey J Anderson and Mitchell McClenaghan.

The pitch for this 4th ODI at Hamilton is expected to be fast and bouncy.