The Gabba Test is heading towards a definite draw as Australia moved into a first innings lead closing Day 4 at 487 for 4 in 121 overs. Skipper Michael Clarke went onto slam his third double century of the calendar year and in the process put up yet another big stand. This time it was with Michael Hussey, who collected an unbeaten 86 (from 109 balls with 12 fours).

Clarke batted right through the 95 overs that were bowled on the fourth day to remain unconquered with 218 (from 350 balls with 21 fours). His current stand with Michael Hussey for the fourth wicket is 188 which means that Australia have piled up 447 runs for the loss of just Ed Cowan since the time they slipped to 40 for 3 on Day 3. 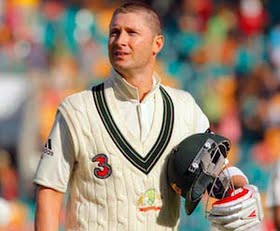 Tea Report: Australia have almost secured the Gabba Test by stretching their total to 306 for 4 in 87 overs by Tea on Day 4. Opener Ed Cowan and Skipper Michael Clarke registered their respective centuries.

The South Africans were defied almost through the afternoon session. First Ed Cowan brought up his maiden Test century and his huge stand of 259 with Clarke came to an end at the stroke of Tea through a freakish run out backing at the non-striker’s end to a straight drive.

Michael Clarke remained unbeaten on 126 and has been joined by veteran Michael Hussey with the Aussies trailing by another 144 runs. The Test match could see a stalemate tomorrow with the Australia into a first innings lead of just 37 runs.

Lunch Report: The overnight pair of Ed Cowan and Skipper Michael Clarke batted through the extended morning session on Day 4 to take Australia safely towards 214 for 3 in 60 overs. Although the odd ball is going past the bat, by and large the pitch looks be pretty flat and quite difficult for the bowlers to get rid of well set batsmen.

Opener Ed Cowan is inching towards a maiden Test Century, he went to Lunch on 98* (from 180 balls with 13 fours) while Michael Clarke has sweetly stroked the ball to collect 78* (from 162 balls with 8 fours). The duo, remember got together when the Aussies were shaken up at 40 for 3.

There is still some work to do for this pair of Cowan and Clarke with the Aussies needing 37 more runs to avoid the follow on. The deficit is still looming large at 236 runs. But they have done quite enough to ensure a draw most likely with just another 5 session left in the Test match.