South African fast bowler Morne Morkel on Monday compared the Centurion track with pitches in India. Morkel finished with figures of 4 for 60

South African fast bowler Morne Morkel on Monday compared the Centurion track with pitches in India. Morkel finished with figures of 4 for 60 as the hosts bowled out India for 307.

"I've played cricket here all my life, and I've never seen a wicket like this at the SuperSport Park. It was really hard work. In the heat, with conditions really tough, it was right up there with one of the hardest spells I've bowled,” Morkel was quoted as saying in an NDTV report after end of third day’s play. 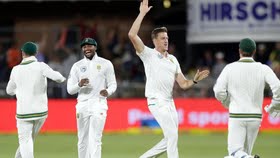 "I think the pace of the wicket was the toughest aspect. You've got a small little window with the new ball. The reason might be because it's under covers overnight, but in the first hour the balls seems a little bit quicker off the deck. But after that, there's actually been no pace in the wicket.”

He was asked if he would compare the pitch to Indian surfaces. "One hundred percent, yes. It's unheard of that a spinner bowls that amount of overs on the first day. We even took the option to open in the over before lunch with a spinner.