When a team finds itself at 126 for 5 in the first innings of a Test, it is very difficult for that side to make a comeback. But, India did exactly that, thanks to some special efforts from both their batsmen and their bowlers

When a team finds itself at 126 for 5 in the first innings of a Test, it is very difficult for that side to make a comeback. But, India did exactly that, thanks to some special efforts from both their batsmen and their bowlers. In the end, they proved top good for West Indies, winning all the big moments and key clashes within the battle. West Indies, on the other hand, had their chances, but failed to grab the same, and in the end had to be content with the fact that they at least managed to compete. It is another matter that with better match-awareness, things could have been different.

They were a number of key turning points in the game, but none bigger than the five-wicket haul by Bhuvneswar Kumar, which completely swung the momentum of the game. Until that point, the game was very well balanced. In fact, at 202 for 3 in their first innings, the hosts would have believed they had a slight edge. But, this was followed by an incredible collapse, which saw West Indies crumble from that strong position to 225 all-out. Kumar made excellent use of the crease during his spell to send back big names like Marlon Samuels, Jermaine Blackwood as well as dangerous players in Shane Dowrich and Jason Holder.

The story of India's batting was also a bit like rising from the ashes. Batting first, they had lost half their side with less than 150 on the board. But, from that point onwards, Ravichandran Ashwin and Wriddhiman Saha batted brilliantly to register their fourth and first Test centuries respectively. India knew well that they had weakened the batting line up by dropping the likes of Murali Vijay and Cheteshwar Pujara, and bringing in Rohit Sharma. As such, both Ashwin and Saha would have been under pressure to deliver for a low score for either of them would have meant exposure to the tail. To their credit, both Ashwin and Saha batted with the kind of maturity needed to deal with the situation.

Even as India won the match with relative ease in the end, there are still a few areas of worry for them. While Lokesh Rahul has slipped into the opening slot without much trouble, Shikhar Dhawan has struggled for a good score following some early success in the series. More worrying, Indian skipper Virat Kohli has just not looked in his elements even since that brilliant double hundred in the opening Test. He has been troubled with the line outside off-stump, and has clearly failed to negotiate the same. In the bowling Mohammed Shami is improving and Bhuvneshwar was excellent, but Ishant Sharma still hasn't learnt how to run through a side. 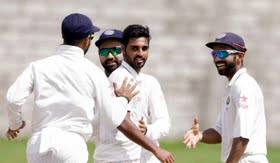 As for West Indies, it was a clear case of not being able to match up to the Indians. The top order woes have continued for them, and bringing in Leon Johnson in place of Rajendra Chandrika hasn't made a spectacular difference. The lack of runs from their star batsman Marlon Samuels has hurt West Indies very badly. Even after all these years, Samuels continues to be the erratic performer he was at the start of his career. The likes of Kraigg Braithwaite and Darren Bravo have taken turns to keep the Windies flag flying. But, it has only been a consolation. In the bowling, apart from Shannon Gabriel no one has made much of an impression. Miguel Cummins' six-for had more to do with the fact that the Indians were going after him.