India captain Virat Kohli was pleased after KL Rahul hit a fluent hundred in the second and final warm-up match for India against Bangladesh at Cardiff.

Batting at number four, Rahul hit 108 while MS Dhoni also smashed a hundred as India posted a big total of 359. The number four has been a worrying slot for India but the injury to Vijay Shankar gave Rahul a chance to bat at number four, and he has perhaps sealed the slot.

"I think the biggest positive to come out was the way KL Rahul batted at four. He is such a class player. It is important that he gets runs and he is a sound player to get the scoreboard ticking. MS and Hardik were superb as well," Virat Kohli said after India's win over Bangladesh. 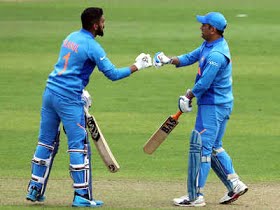 Kohli added, "We are glad we got what we wanted from the warm-ups. The last 15 overs were challenging, it can get pretty hectic in the field towards the end."

Rahul walked into bat after India again lost their openers, Shikhar Dhawan and Rohit Sharma, early. He then featured in a 164-run partnership with MS Dhoni, who slammed 113. India has tried various combinations at number four over the last 12 months but nothing much worked.

The Indian bowlers also impressed in the game, bowling out Bangladesh for 264. Both the spinners, Yuzvendra Chahal and Kuldeep Yadav, who struggled in the IPL, claimed three wickets each.