IPL 8 DD vs KKR Preview, Live Scores: Delhi Daredevils will face Kolkata Knight Riders in match 42 of IPL 8 at the Eden Gardens in Kolkata on Thursday. Kolkata, the defending champions

Delhi Daredevils will face Kolkata Knight Riders in match 42 of IPL 8 at the Eden Gardens in Kolkata on Thursday. Kolkata, the defending champions, would undoubtedly start favourites against Delhi, who have just not found their groove this season. Gautam Gambhir’s men are currently placed third in the points table, with 11 points from 10 matches. Delhi, on the other hand, are placed at number six, with eight points from ten games. While Kolkata go into the match having overcome Sunrisers Hyderabad with ease, Delhi registered another disappointing loss against Mumbai Indians in their previous encounter.

Kolkata’s bowling against Sunrisers was clearly the defining factor of their victory in the last match. Umesh Yadav stood out, his dismissal of David Warner early on was particularly impressive. He has bowled with vigour throughout IPL 8, and will remain crucial to Kolkata’s cause in the coming games as well. The spinners did a very good job against Sunrisers with Brad Hogg and Johan Botha bringing all their experience into play and stifling the opposition. Considering the manner in which the slow bowlers have performed for Kolkata, they haven’t missed Sunil Narine as badly as was expected. 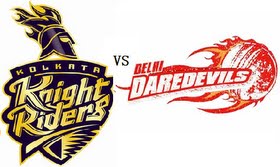 Kolkata’s batting can be exceptional on a given day, but it has been observed during this edition that they have been inconsistent. Again, a lot will depend on the kind of start Gautam Gambhir and Robin Uthappa give Kolkata. If either of the two go on to make a significant score, Kolkata normally do well. Andre Russell would be one of the keys in the big-hitting department, with Yusuf Pathan not being the same force he used to be, although he briefly flourished against Sunrisers. Manish Pandey and Suryakumar Yadav will be the other key players in the batting department.

Delhi failed against Mumbai primarily because they could not put up a competent score on the board. Both Mayank Agarwal and Shreyas Iyer failed in the last game, and considering that they have been crucial to Delhi’s success, both will be keen to make amends against Kolkata. Iyer, in particular, has impressed with his attacking stroke play. Delhi should, however, be pleased with the fact that Yuvraj Singh got some much needed runs against Mumbai. Lack of runs from Angelo Mathews and Kedar Jadhav however remains a concern.

Bowling has been Delhi’s stronger suit, and they ran Mumbai close thanks to the same. The inclusion of Zaheer Khan in the starting eleven has added some teeth to the attack while Nathan Coulter-Nile has continued to remain impressive consistently. Amit Mishra and Angelo Mathews also bowled well against Mumbai. And, while Imran Tahir proved expensive in the previous game, he has been among the best bowlers on show this season. While Kolkata would be keen to extent their winning run, Delhi desperately need to win to stay alive.