Recap: Chennai’s road to the final

As Chennai Super Kings make an endeavour to win their third IPL crown among all the clouds surrounding their franchise, and even the tournament as a whole, here’s a look back at the impressive manner in which Chennai have managed to book their place in the final for the fifth time overall, and fourth in a row.

As Chennai Super Kings make an endeavour to win their third IPL crown among all the clouds surrounding their franchise, and even the tournament as a whole, here’s a look back at the impressive manner in which Chennai have managed to book their place in the final for the fifth time overall, and fourth in a row.

Chennai began IPL 6 on a losing note, going down to the opponents they will face in the final, Mumbai Indians, by 9 runs. This in spite of a whirlwind half-century from skipper MS Dhoni. They fought back strongly to thrash Kings XI Punjab by 10 wickets. Michael Hussey starred with an unbeaten 86. In their third game of the tournament, Chennai defeated Royal Challengers Bangalore by four wickets. This was the game in which RP Singh bowled a no-ball off the last delivery to let Chennai escape to victory. Chennai suffered a setback in their next encounter as they surprisingly went down to Pune Warriors by 24 runs. 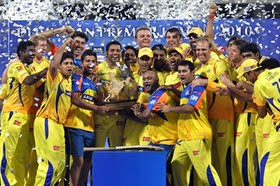 Following the loss to Pune, Chennai hit a purple patch, winning the next seven matches on a trot. They began by clobbering Delhi Daredevils in an 86-run triumph. This was followed by impressive wins against Kolkata Knight Riders (twice), Rajasthan Royals, Sunrisers Hyderabad and Kings XI Punjab. In the meantime, they also avenged their loss against Pune, defeating them in the latter’s home ground. Some standout performances during this phase included 3/10 by Mohit Sharma against Delhi, 88 by Mike Hussey against Rajasthan, 95 by Mike Hussey against Kolkata and 100 not out by Suresh Raina against Kings XI Punjab.

Chennai’s winning streak was snapped in a somewhat embarrassing manner, when they were bundled out for 79 by Mumbai. However, as often in the past, they fought back strongly. They inflicted a heavy defeat on Sunrisers Hyderabad, by 77 runs, a game in which Raina was left stranded on 99 not out. They went down to Rajasthan by five wickets courtesy a blistering innings by Shane Watson, but easily got the better of Delhi following a brilliant all-round performance. This game saw Dhoni smashing a typically aggressive half-century before Albie Morkel shone with the ball, picking up three wickets. In their last league game, they went down to Bangalore by 24 runs as Virat Kohli smashed Chennai’s bowlers all over the park in a rain-shortened encounter. The defeat however did not have any impact on Chennai’s progress as they had already qualified for the play-offs.

In what was to be a precursor to the final, Chennai took on Mumbai in the first qualifier. Batting first, the Chennai batsmen pummeled Mumbai’s bowlers into submission. Mike Hussey made 86 from 58 balls while Raina smashed 82 from 42 balls, as Dhoni’s men put up 192 on the board. In reply, Mumbai could manage only 144 in spite of Dwayne Smith’s belligerent 68, as Chennai booked their place in the final one more time.