New Zealand had a wonderful World Cup campaign before it all fell apart against Australia in the final at Melbourne. Here's a look back at how players from the Black Caps performed in the tournament

New Zealand had a wonderful World Cup campaign before it all fell apart against Australia in the final at Melbourne. Here's a look back at how players from the Black Caps performed in the tournament. 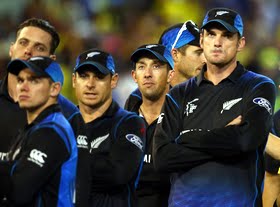 Martin Guptill (7/10): With 547 runs, Guptill was the leading run-scorer in the World Cup. He made a fabulous 237 not out against West Indies, and a hundred against Bangladesh in the game before. But, he was a failure in the semis and the final, which took some sheen off his performance.

Brendon McCullum (8/10): The Kiwi skipper's impact on the tournament cannot be judged in numbers. For the record, he scored 328 runs with four fifties. But, it was the manner in which he smashed opponents that was so captivating. Unfortunately, he failed in the final, and so did the Kiwis.

Kane Williamson (2/10): There were high hopes from him, but he had a poor tournament scoring just 234 runs. He starred in the close chase against Australia with an unbeaten 45, but otherwise was a disappointment.

Ross Taylor (4/10): The veteran frustrated the Kiwis throughout the tournament. He kept finding starts, but also ways to get himself out. Taylor managed only one fifty in the tournament. He got to 40 in the final, and then gave it away, finishing the World Cup with 221 runs.

Grant Elliott (8/10): A fringe selection, Elliott repaid the faith of the selectors, and the fans. He made the crucial 84 not out in the semis to break South Africa's heart. In the final, he made 83, and ended with a tally of 310 runs.

Corey Anderson (6/10): He returned with mixed results, getting a half century against Sri Lanka early in the event, and one in the semis. With the ball Anderson picked up 14 wickets, but many might remember his duck in the final.

Luke Ronchi (1/10): So much was expected of the big-hitter lower down the order, but he was a total flop with only 73 runs, including a duck in the final.

Daniel Vettori (7/10): The veteran spinner left international cricket on a high, claiming 15 wickets at an economy rate of 3.84. He impressed all with his flight and guile, and a stunning catch.

Trent Boult (9/10): The left-arm seamer was brilliant with the ball, finishing the tournament with 22 wickets, on par with Mitchell Starc. He was potent against most opponents, and is expected to go places.

Tim Southee (5/10): He began in terrific fashion, destroying England with seven wickets, but his form petered away as the tournament progressed. Southee finished with 15 wickets at an economy rate of 5.86.

Adam Milne (4/10): He was impressive with his pace until he got injured. He provided good back up to Southee and Boult in the games he played, finishing with five wickets.