England finished their India tour with a consolation win in the Fifth and Final ODI at Dharamsala. The English victory was well set up by its bowlers who kept India down to 226 and the run chase was smoothly anchored by Ian Bell who scored an unbeaten 3rd ODI century.

England finished their India tour with a consolation win in the Fifth and Final ODI at Dharamsala. The English victory was well set up by its bowlers who kept India down to 226 and the run chase was smoothly anchored by Ian Bell who scored an unbeaten 3rd ODI century. Bell carried his bat through with his 113* (from 143 balls with 13 fours and a six) in a 7-wicket win with 16 balls to spare. India will be credited for making a match of this as they were down and out at one stage at 79 for 5 after being asked to bat first on a damp pitch. Suresh Raina scored a spectacular 83 to lift India to a competitive total.

India was in a soup in the morning session with makeshift opener Rohit Sharma and Virat Kohli falling in consecutive deliveries, both edging their booming cover drives off Tim Bresnan to James Tredwell at second slip in the 4th over. Yuvraj Singh disappeared in the 7th over with a leading edge off Finn which was caught at backward point. Gambhir (24 from 42 balls) who worked hard to survive against the seamers fell in a tame fashion to off-spinner James Tredwell who induced a fatal uppish square cut.

The hosts were reeling at 49 for 4 when the in-form MS Dhoni joined Raina. Dhoni couldn’t do much and was out lbw to Steven Finn which left India in a mess at 79 for 5 in the 22nd over. Thanks to a good partnership of 78 between Suresh Raina and Ravindra Jadeja, India got onto a nice platform. Jadeja threw his wicket needlessly with a slog off Tredwell having got nicely set on 39 (from 65 balls with a four and 2 sixes). In the 42nd over, India received a major blow when Suresh Raina miscued a pull off Chris Woakes into the hands of mid wicket having lifted the score to 177 for 7. It was a great knock of 83 (in 98 balls with 8 fours and 2 sixes) from Raina who was earlier dropped on 5 by Tredwell in the slips off a loose drive.

Despite losing Raina early in the slog overs, India ended up with a healthy total of 226 all out in 49.4 overs with Bhuvneshwar Kumar proving his all-round credentials at the international level by scoring a career best of 31 (from 30 balls with 5 fours) and R Ashwin scored a useful 19. Tim Bresnan was the most successful bowler for the visitors taking 4 for 45. Steven Finn was easily the best bowler though with his 2 for 27 in 10 overs while James Tredwell wasn’t far behind him with his figures of 2 for 25 in 10 overs. 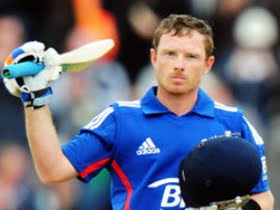 England saw through the new ball threat in their run chase of 227 to come up with a solid opening stand of 53 by 11.5 overs before Ishant Sharma breached the defences of Skipper Alastair Cook (22 from 40 balls). Shami Ahmed gave India a realistic hope in the 19th over when he bounced out Kevin Pietersen (6) to induce a top edged pull which was caught by an athletic Jadeja running some distance from deep squareleg to deep mid wicket. The visitors from 64 for 2 moved to 143 for 3 by the 36th over with young Joe Root supporting Ian Bell in an effort to seal the run chase. Root (31 from 49 balls) was clean bowled in the batting powerplay attempting a needless slog off Jadeja.

Eoin Morgan, who has been short of runs on this tour came good to finish the match along with Bell in an unbroken stand of 84 for the 4th wicket. Morgan with a run-a-ball 40* with three sixes ensured that England weren’t in trouble with the run rate. Bell on the other hand batted right through the innings, carrying his bat scoring a second ODI hundred against India. He was the Man of the Match while Suresh Raina got the Man of the Series award. The Indian bowling was once again good, in particular, Ishant Sharma with 1 for 37 and Jadeja with 1 for 26 in 7.2 overs. However, none of the bowlers could take wickets in a heap or in a hurry.

Toss and Teams: England have won the toss and asked India to bat first in the Final ODI at the HPCA Stadium in Dharamsala. The visitors have made one change with Chris Woakes replacing Jade Dernbach while India have made no changes despite already having the series in the pocket.

The pitch at Dharamsala is expected to have plenty of pace and bounce because of its hardness. With the conditions being very cold, the pitch is likely to retain the moisture for a longtime to keep the seamers and the spinners interested. Unless the sun breaks through and stays, the pitch will continue to trouble the batsmen.