Afghanistan getting Test status, the gentleman’s game has been hogging the limelight in the war-torn country. And the latest cricketer to make the world sit up and take note is wicketkeeper

Afghanistan getting Test status, the gentleman’s game has been hogging the limelight in the war-torn country. And the latest cricketer to make the world sit up and take note is wicketkeeper Shafiqullah Shafaq. Shafaq joined the list of few cricketers across the world to hit a double century in T20 cricket — the shortest form of the game.
Shafaq played the whirlwind knock in Paragon Nangarhar Champion Trophy, a local tournament. Held in Afghanistan, it has some of the best players in the country playing in it and Shafaq hit 214 off just 71 balls with 21 sixes and 16 fours. 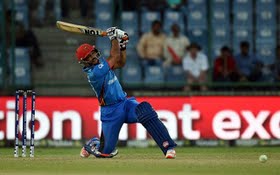 Shafaq knock helped his team Khateez Cricket Academy score a mammoth 351 off just 120 balls. His teammate Waheedullah Shafaq also hit 81 off just 31 balls. In reply, Kabul Star Cricket Club could only manage a meager 107.
Shafaq has been a part of the Afghanistan national side for a while now and is one of the few players to have played in the last three editions of the ICC World T20 (2012, 2014 and 2016). Shafaq has been pretty impressive in patches when it comes to his international career. Shafaq has played 35 T20 matches so far and has scored 392 runs. While his highest score in international T20s is just 51, he has an impressive strike rate of 143.07.
In reply to Khateez’s huge total, the Star Cricket Club were wrapped up for just 107 runs and lost the game by a huge total of 244 runs. Talking to CricTracker exclusively, Shafiqullah has confirmed his achievement and expressed that he is happy to have played such a knock with his brother for company.
Fastest ODI fifty for the team
He recently struck a 28-ball fifty against Ireland in the ODI series at Greater Noida, equaling Mohammad Nabi’s record for the fastest fifty in ODIs for Afghanistan. He was also applauded for his unbeaten 35 off 20 balls against England in the WT20 2016 as Afghanistan fell short of England’s total of 142 by just 15 runs.
His brother, Waheedullah Shafaq has played for Afghanistan in the previous two Under 19 World Cups in 2014 and 2016. The 20-year-old also represented the Afghanistan A side in their recent tour of Zimbabwe.