Their fortunes however changed with a change in captain with Dimuth Karunaratne taking over from the sacked Dinesh Chandimal.

Their fortunes however changed with a change in captain with Dimuth Karunaratne taking over from the sacked Dinesh Chandimal. The new captain dedicated the triuSri Lanka stunned world cricket and themselves to shock the South Africans in the latter’s den. This came after Sri Lanka were expectedly embarrassed in New Zealand and Australia. 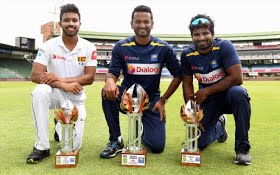 “I have to dedicate this win to all the guys who supported us, the Sri Lankan fans who supported us. They backed us when we kept losing, we wanted to do something for them,” Karunaratne said after the shocking win.

Following the unexpected triumph, Sri Lanka have become the first side from Asia to win a Test series in South Africa.