World Cup 2019: South Africa look to get back on track against Bangladesh

After having a really tough time against England in the tournament opener, South Africa will look to get their World Cup

After having a really tough time against England in the tournament opener, South Africa will look to get their World Cup campaign back on track when they face Bangladesh in their second match on Sunday at The Oval.

The Proteas just could not get going in the game against England especially their batsmen. Chasing 300 plus is not a difficult task these days. However, South Africa's batsmen were under the pump right from the start. Except for Quinton de Kock, no one could really make an impression. The likes of Hashim Amla and skipper Faf du Plessis will need to stand up against Bangladesh.

If we take a look at the bowling, they clearly missed Dale Steyn as they could not apply pressure throughout the innings. At the same time, Kagiso Rabada and Lungi Ngidi have been doing a good job for the team while Imran Tahir also made an early impression for South Africa, dismissing the in-form Jonny Bairstow for a first-ball duck. 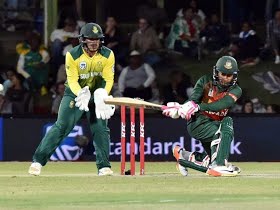 Bangladesh goes into the clash having registered a 95-run defeat to India in the warm-up game. Their bowlers were completely taken apart as KL Rahul and MS Dhoni hit hundreds. However, they did strike early to send back the Indian openers cheaply again. In skipper Mashrafe Mortaza and Mustafizur Rahman, they do possess two quality pacers, who can compete against the best.

In the batting department, the form of Mushfiqur Rahim will be the key. He is among the most experienced of the batsmen in the team and will be looked up to provide much-needed stability in the middle order. Liton Das batted and Tamim Iqbal will also be expected to do well at the top of the order while their talisman all-rounder Shakib Al Hasan is still around and can make a significant difference.