The third day of the Galle Test began with India looking all set to wrap up the match on day three itself. However, a spectacular counter-attacking hundred by Dinesh Chandimal, scored in adverse circumstances

The third day of the Galle Test began with India looking all set to wrap up the match on day three itself. However, a spectacular counter-attacking hundred by Dinesh Chandimal, scored in adverse circumstances, meant that Sri Lanka not only took the game into the fourth day, but also put them in with a decent chance to push for a come from behind, rather unexpected, victory. India are still the favourites to win the Test, chasing 176. But, Chandimal has definitely swung the momentum Sri Lanka's way. And, if the Lankan bowlers can exploit the turning conditions on offer, they might still be able to pull off an upset. Things began positively as Rangana Herath sent back Lokesh Rahul for 5.

Chandimal walked into bat with the team in all sorts of strife. The Indians were completely on top with Ravichandran Ashwin and Amit Mishra continuing their domination over the Sri Lankan batsmen on day three as well. Kumar Sangakkara was among those back in the hut, having made a pleasant 40 in his last innings at Galle. Little did India know what was to hit them. Chandimal, in the company of Lahiru Thirimanne, decided to reverse the team's tactics, and it paid off wonderfully well. Until the two joined forces, the Lanka batsmen were content playing defensive cricket. The move wasn't working though. Chandimal came in, and started tonking the ball all around, and soon the Indian bowling lost wings. 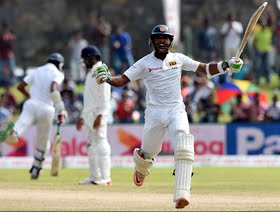 Chandimal's innings was an exhibition in counter-attacking as he swept, reverse swept, slog swept and even played switch-hit with ease against spinners. On most occasions he connected, and the few times he didn't, he was lucky as the ball fell in no-man's land. That said, Chandimal also created his luck by opening up the field through his bold strokeplay. Taking a cue from him, even Thirimanne began to go on the attack. Soon, the Indian attack, which was so potent in the morning session, had lost sting. Even Ashwin and Mishra, who had dominated the Test failed to keep the duo, Chandimal, in particular, quiet.

The fast bowlers, when introduced, also failed to stop the onslaught of runs. The much-needed break for India finally came when Ashwin managed to induce an edge off Thirimanne as Ajinkya Rahane took another brilliant catch; he ended up creating a record for most catches in a Test -- eight. The momentum by now was with Lanka, as Chandimal continued the repair job in the company of Jehan Mubarak, who contributed a crucial 49 before becoming Harbhajan Singh's first and only victim of the match. The tail did not contribute much in the form of runs, but they hung on long enough for Chandimal to have a blast. The latter himself batted with great composure to shepherd the tail and remain unbeaten on an unforgettable 162.

India might feel they were unlucky as a couple of seemingly straightforward decisions went against them. They wouldn't gain much sympathy considering their aversion to DRS. Chandimal top-edged one into his helmet early on in his innings, against Ashwin. Backward short leg took the catch, but the umpire's finger wasn't raised. Mishra then got Thirimanne to edge one off his pads into the hands at short-leg. This time, the other umpire refused to raise his finger. The partnership developed for Lanka from thereon, and might have assumed dangerous proportions as far as India are concerned.