England have produced some stunning batting efforts in the recent past, as part of their one-day revival in the post-2015 World Cup debacle period. And, their performance at Trent Bridge on Tuesday was astonishing to say the least.

England have produced some stunning batting efforts in the recent past, as part of their one-day revival in the post-2015 World Cup debacle period. And, their performance at Trent Bridge on Tuesday was astonishing to say the least. They laid into the Pakistan bowling as if there was no tomorrow to come up with the record highest total in one-day internationals till date. On a batting beauty, Pakistan bowlers were mauled like lambs. The visitors did not help their cause by producing an atrocious display in the field, full of dropped catches and misfields. It was the kind of effort Pakistan fans dread.

Without an iota of doubt, Alex Hales was the star of the show. Going into the match, the England opener was under extreme pressure. He had not made a single score of note in the Tests as well, and fell cheaply in the first two one-dayers as well. There were serious worries as to whether his Test form would affect his limited overs showing as well. But, Hales put rest to all those doubts with one innings of brilliance. It was the kind of day for Hales when everything you do turns gold. And so, he could have been out twice earlier, but was reprieved both times and ended up taking up the record for England's highest ODI score. For someone under pressure, it was an exceptional innings in every sense.

While Hales shone at one end, there were some excellent performances from players at the other end as well. Joe Root just does not like to get out early in ODIs these days. According, he eased his way to another half-century, at nearly a run-a-ball, playing the perfect foil to Hales, who was hell bent on punishing the Pakistan bowlers. Yet again though, he missed out on a hundred, which seems to be becoming his weakness. But, the 248-run stand between Hales and Root set up things perfectly for the finishers, Eoin Morgan and Jos Buttler, and the duo carried on the great work.

Buttler has produced some sensational innings in recent times in varied circumstances. But, on Tuesday he had an open invitation to go on the attack from the word go, and made life hell for Pakistan's bowlers, as if things weren't bad enough. He smashed 90 from 51 balls as fours and sixes came galore. The same was the case with skipper Morgan as he raced away to 57 from 27 balls, before the overs ran out. When the last ball of the innings was bowled, Pakistan would have heaved a sigh of relief, such was the trauma they underwent. It reflected in their body language, and their overall effort in the field. 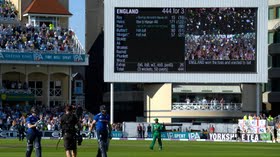 The figures of Pakistan's bowlers told the story in itself. Wahab Riaz, who can either be brilliant or bizarre, gave away a mammoth 110 runs in his 10 overs. These are now the second worst figures in ODIs after Mick Lewis forgettable performance a decade back. What Wahab's bowling figures don't tell you are that he got two wickets, and both times overstepped to relieve the opposition. Mohammad Amir and Hasan Ali went for over 7, Yasir Shah went at 8 in his 6 while Shoaib Malik was thrashed for 44 in his three overs. Nothing moe really needs to be said about what went wrong for Pakistan.