An unbeaten 51-run stand for the fourth-wicket between Darren Bravo (30) and Shivnarine Chanderpaul (24) on Wednesday set up the fourth day of the first Test between West Indies and India at Sabina Park for an exciting finish.

An unbeaten 51-run stand for the fourth-wicket between Darren Bravo (30) and Shivnarine Chanderpaul (24) on Wednesday set up the fourth day of the first Test between West Indies and India at Sabina Park for an exciting finish. 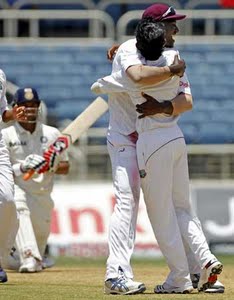 The two batsmen, who got together when the team's score was 80/3, will play a crucial role if the home side need to overhaul the 326-run target set by India.

West Indies were 131/3 when the stumps were drawn on the third day, thus needing 195 more runs to win the encounter.

West Indies openers Adrian Barath and Lendl Simmons gave the home side a rousing start as they took team's score to 50 in 9.1 overs.

Barath made his positive intent clear from the outset as he delivered powerful blows one after another to both Praveen Kumar and Ishant Sharma.

Both batsmen hit six fours and three sixes inside the first ten overs and made Indian bowlers err in their line and length.

But after surviving a scare on the third delivery of Kumar's sixth over, Barath fell driving the swinging ball that took the thick outside edge of his bat and landed into the safe hands of Suresh Raina, who was placed in the third slip just before that delivery.

One wicket led to another as Ishant Sharma scalped Ramnaresh Sarwan for the second time in the match. Sarwan was caught brilliantly in the gully by Virat Kohli for a duck.

Sharma then got the wicket of Simmons, who failed to judge the length of Ishant's full-pithced delivery and was bowled comprehensively for 27.

So after the opening stand of 62 between Barath and Simmons, the first three West Indies' wickets fell for just 18 runs, thus giving India a chance to put pressure on the home team's batsmen.

Amit Mishra (28) provided the much-needed support to Dravid after Darren Sammy struck twice in one over after lunch to reduce India to 183/8.

Sammy's in-cutter hit Harbhajan Singh (5) over his knee roll but umpire Daryl Harper raised his finger after a little thought.

Had the much contentious Decision Referral System (DRS) been used in the series and if Harbhajan had used it, he would have been given not out as the ball was going over the top of the stumps as shown by the TV replays.

The West Indies captain then clean bowled Praveen Kumar, who tried to play a flick to a well-pitched delivery. Kumar failed to open his account.

Dravid was the last Indian batsman to get out when he tried to hit another six off Devendra Bishoo, thus giving a simple catch to Sarwan at mid-on.

Sammy and Bishoo took four wickets each in India's second innings, while Fidel Edwards and Ravi Rampaul chipped in with a wicket each.

Earlier, India went into lunch at 166/6, losing the wickets of Suresh Raina (26) and MS Dhoni (16) just before the break. Both the batsmen were scalped by Devendra Bishoo, who bowled brilliantly despite having a sore knee.

Rahul Dravid and Raina shared a 48-run stand for the fifth-wicket that helped India recover from the early loss of Virat Kohli.

While 38-year-old Dravid reached his laborious fifty in 139 balls, Raina made sure that the strike was rotated at regular intervals.

India got an early jolt when Kohli (15) was caught behind off the bowling of Edwards on the third morning.

The ball, which was going down the leg side, kissed Kohli's bat before settling into the gloves of wicketkeeper Carlton Baugh.

Raina, after providing the much-needed support to Dravid, fell to Bishoo. He was caught at leg slip while trying to sweep a straight delivery of the leg-spinner.

Dhoni oozed positive intent from the time he arrived at 148-5, lashing a six and a four off Bishoo. But after reaching a run-a-ball 16, India's captain slapped a short ball from Bishoo straight to cover at the stroke of lunch.