India lost three wickets in their second innings but Rahul Dravid's 45 not out ensured that the visitors' lead grew to 164 runs at the end of second day of the first Test against West Indies here at Sabina Park on Tuesday.

India lost three wickets in their second innings but Rahul Dravid's 45 not out ensured that the visitors' lead grew to 164 runs at the end of second day of the first Test against West Indies here at Sabina Park on Tuesday. 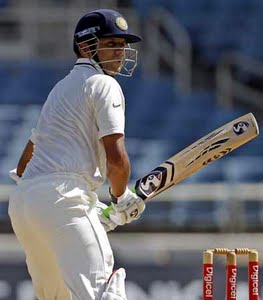 India's second essay, however, began on a sorry note when low bounce on a Ravi Rampaul delivery caught Murali Vijay hopping and right in front to be adjudged lbw without troubling the scorers.

Dravid and Abhinav Mukund then buckled down for a half-century partnership that averted any further damage.

First, it was Mukund (25) who thick-edged an attempted cut off Devendra Bishoo straight into the gloves of Carlton Baugh. Then, in the next over, skipper Darren Sammy snapped up VVS Laxman, (0) caught and bowled, to end a forgettable Test for the Indian stalwart.

Dravid will be accompanied by debutant Virat Kohli, who was not out at 14 runs, on the third morning.

One of India's two debutants in the first Test, Praveen Kumar struck three decisive blows in quick succession on the second morning to bring the visitors right back in contention, with the West Indies reeeling at 119/5 at lunch.

However, it was Ishant Sharma who got India the first wicket of day two when he caught Sarwan (3) right in front in just the second over of the morning.

Overnight not-out batsman Adrian Barath and Darren Bravo then played with a lot of valor, with Barath reaching a patient fifty. But both succumbed to the swing of Kumar. While Barath made an impressive 64, Bravo was dismissed after scoring 18.

Brendon Nash (1) then became Kumar's third victim of the morning when he was caught in the slip by Suresh Raina.

The home side started the day at 34/1 with Adrian Barath (26) and Ramnaresh Sarwan (2) starting the proceedings for the hosts.

The visitors, choosing to bat first, were behind the eight ball till Harbhajan Singh (70) and Suresh Raina (82) saved the day for them by their gutsy half centuries on Monday.

Ishant Sharma then provided India the much-needed early wicket by dismissing Windies' opener Simmons after the Indian innings folded up soon after tea on day one.