South Africa, led by their skipper AB de Villiers, batted sensationally to thrash West Indies by 257 runs in their group match on Friday. Batting first, South Africa amassed a massive 408 courtesy an unbelievable 162 from 66 balls by de Villiers. Imran Tahir then claimed five wickets as West Indies completely collapsed under pressure. What was expected to be a tight contest in the wake of Windies’ rollicking victory over Zimbabwe thus ended up being a no contest. Here’s a look at some startling facts from the match. 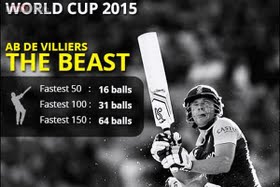 De Villiers’ 162 is now the second highest individual score by a South African in the World Cup next to Gary Kirsten’s 188 against the UAE in Rawalpindi during the 1996 World Cup.

While de Villiers faced only 66 balls for his unbeaten 162, Hashim Amla and Faf du Plessis faced 88 and 70 balls for their knocks and made 65 and 62 respectively.

The 257-run margin by which South Africa defeated West Indies is the joint-highest victory margin in the World Cup in terms of runs. India had defeated Bermuda by the same margin back in the 2007 World Cup.

West Indies captain Jason Holder conceded 104 runs in his 10 overs. This is the second most expensive bowling analysis ever in the history of the World Cup.

The West Indian bowlers have now conceded 400 plus scores three times in one-dayers. No other team has this dubious distinction. Sri Lanka and South Africa have given away 400 plus twice.

Leggie Imran Tahir claimed 5 for 45 in the match. These are his best bowling analysis, and the first time he has taken five wickets in an innings. Earlier, he had four four-wicket hauls to his credit.