IPL 2020 MI vs DC Qualifier 1: All round Mumbai crush Delhi to reach the finals

Mumbai were clinical today, both with the bat and ball as they cruised to their sixth finale. After putting up 200 on the board, Boult and Bumrah bowled fiery spells with the ball, with Bumrah registering figures of 4-14.

Shreyas Iyer decided to bowl first after winning the toss, keeping the previous match results in mind. De Kock welcomed Daniel Sams by caressing three boundaries against him in the first over itself. Ashwin then picked up Rohit for a golden duck off just his third delivery. De Kock was a man on a mission as he continued to attack, and was ably partnered by Suryakumar Yadav. Apart from Ashwin, none of the other Delhi bowlers were posing any threat to the free flowing MI batsmen as they raced to 63-1 at the end of the fielding restrictions.

It was Ashwin only who got them the much needed breakthrough, as Delhi staged a mini-comeback. He got de Kock caught at long-off by Dhawan, not before the batsman had scored a 25-ball 40. After a few relatively quiet overs, Yadav got to his fifty, but threw his wicket immediately after that to Nortje. Pollard was caught brilliantly by Rabada at long on for a duck, giving Ashwin his third wicket of the match. 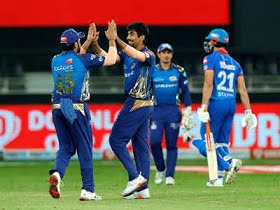 All of a sudden MI found themselves at 108-4 at the end of 14 overs, and it seemed they had thrown away the good start. But it wasn’t to be as Kishan and Krunal Pandya went after the Delhi bowlers. Rabada’s over went for 14 and Nortje’s for 18 as both the batsmen had put their feet on the accelerator. Krunal Pandya was dismissed by Stoinis, and it was his younger brother who continued the carnage. The last three overs cost Delhi 55 runs with Kishan helping himself to a 30-ball 55 and Hardik Pandya to a 14-ball 37. On a pitch where the ball was coming on to the bat easily, Delhi bowlers offered them pace and were duly punished. The target set for Delhi to reach the final was 201.

Chasing a mammoth target, Delhi got off to a disastrous start as they lost their top three batsmen for ducks. Within the first 8 balls of the innings, the score read 0-3, as Boult and Bumrah ran riot. Boult picked Shaw with an outswinger and Rahane with an inswinger in the first over itself. Bumrah castled Dhawan with a toe-crushing yorker in his first. Stoinis and Iyer counterattacked but that didn’t last for long as Bumrah picked up the Delhi captain for just 12. Pant struggled greatly for his 9 ball stay at the crease which yielded only 3 runs, and holed out to Yadav at long-on, giving Krunal Pandya his first wicket.

Reeling at 42-5 from eight overs, Delhi’s chances were looking bleak, but Stoinis and Axar Patel forged a strong partnership. Stoinis smashed two sixes and a four in Rahul Chahar’s first over and soon got off to his fifty. Axar Patel too was hitting some handy boundaries, with his two sixes off Pollard giving Delhi a glimmer of hope.

89 runs were required from the last five, and Rohit turned to his trump card Bumrah for a breakthrough. He responded with not one but two as Stoinis was bowled comprehensively and Sams was dismissed for a duck by the star MI pacer. Axar and Rabada smashed a few boundaries with the former scoring a gritty 42, but it was too high a target to be achieved by the Delhi bowlers as they fell short of Mumbai’s target by 57 runs.